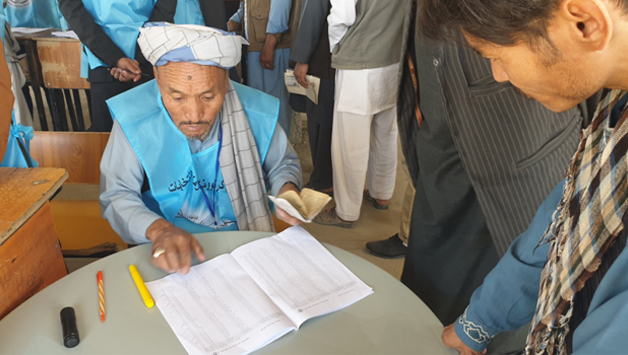 One month ago, the Independent Election Commission (IEC) announced its readiness to hold provincial, parliamentary, and some municipal council elections in Ghazni. The commission set October this year for the elections and called on the government to provide the necessary funding and security. Officials at the IEC said that after the election date announcement, they sent the election plan to the president’s office. The government, however, has remained silent on the possibility of holding these elections. For its part, the Interior Ministry says it is ready to secure the election if the plan is approved by the presidential palace. The Ministry of Finance also has stated that it has no problem financing the election for the provincial and parliamentary councils, and some municipalities, but has not yet received a funding request. But the country’s election monitoring bodies believe that the government has no will to hold these elections and his focused on the peace process.

Naeem Asghari, deputy director of the Free and Fair Election Forum of Afghanistan (FEFA), told 8 Subh on Sunday, January 10, that the government was not ready to hold elections for Ghazni provincial and parliamentary councils. He added that even though one of the political agreements between Ghani and Abdullah was to reform the electoral system and hold transparent and fair elections, it is clear that the government does not want to hold them, as it has done nothing in this regard in the last two years. Mr. Asghari said that although the Ministry of Justice had recently amended the election law to address some challenges, the government remained silent and did not take any action. Meanwhile, the Ministry of Justice announced the amendment of the election law on December 2 last year. The ministry said that the electoral system, electoral structures, election monitoring systems, voter registration process, enforcement mechanisms, and the use of technology were among the issues discussed in the election law. Besides, the IEC was reminded that it was supposed to finalize the draft law amending the election law and discuss it with the Ministry of Justice and the National Assembly soon.

Moreover, Mr. Asghari questioned the functioning of the Independent Election Commission and claimed that it lacked the determination to hold elections. According to him, the commission remained silent until election monitoring bodies criticized the Ghazni provincial and parliamentary council elections. Provincial council elections were supposed to be held together with the presidential election, but more than two years later, the election has not yet taken place. He also referred to the Ghazni parliamentary elections and said that if these elections were not held, the principle of citizenship rights in this province will be lost. According to Asghari, a citizen appoints a person as a representative for four or five years, but eventually becomes dissatisfied with the representation and wants to elect another representative.

Meanwhile, the representatives of Ghazni province in the House of Representatives are from a specific ethnic group and remained as representatives in the 17th round due to the lack of parliamentary elections in this province. The parliamentary elections in Ghazni province were supposed to be held at the same time as the presidential elections but were not held due to lack of resources and other problems. The deputy director of FEFA added that the peace talks had now overshadowed the government’s work and that the government did not consider holding elections as one of its priorities. He called on the government to make elections a priority and to use them as an achievement in the peace talks.

The Independent Election Commission reiterated its readiness to hold elections for Ghazni Provincial, Parliamentary Councils, and some municipalities next month, provided funding and security is ensured. Commission officials told 8 Subh that they had discussed the election plan with the government, but had not received a clear response yet. The commission has estimated the election budget at about $100 million. Although the details of the plan have not been made public, the draft calls for $19 million for the Ghazni parliamentary elections and more than $80 million for the provincial council elections. Although attempts were made to obtain the Presidential Palace’s views on the possibility of holding these elections, government officials declined to respond despite repeated calls.