Final women's tournament: Boca beats River and is the first champion of the professional era 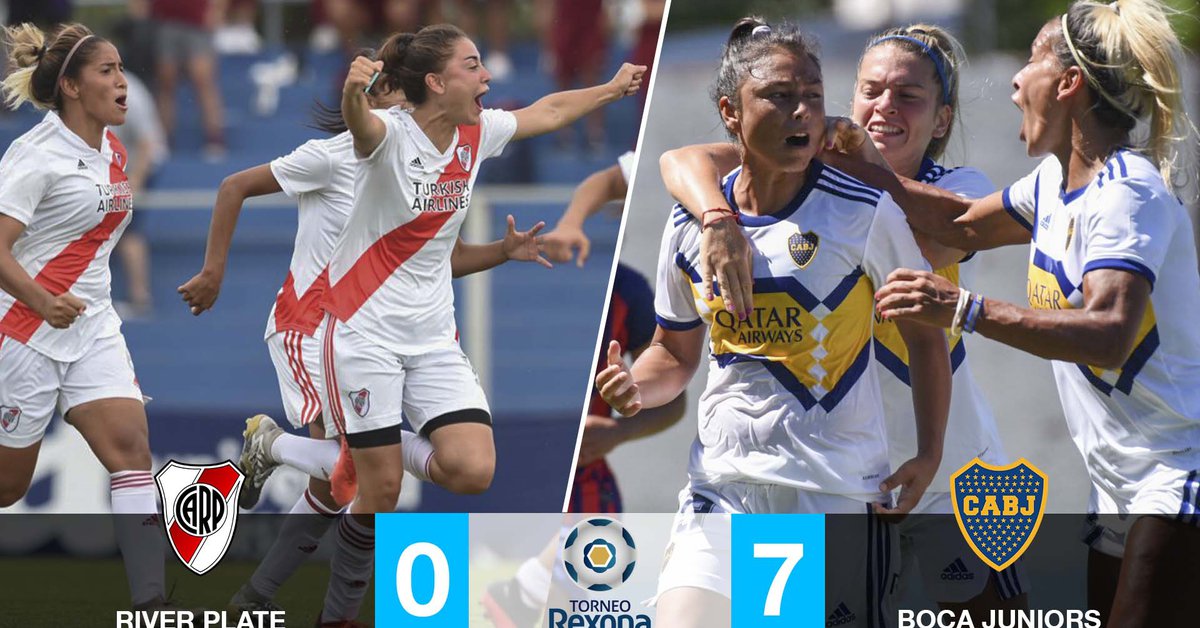 Boca beat River 6-0 in a Superclásico that defines the first champions of the professional era of Argentine women’s football . The goals for the final of the Rexona Tournament that takes place in the stadium José Amalfitani de Vélez Sarsfield and has the televising of TNT Sports, They were scored by Clarisa Huber, Yamila Rodríguez, Lorena Benítez, Fabiana Vallejos and a double by Andrea Ojeda.

The two teams are already classified to the Copa Libertadores 2020 to be played in March at the Argentina and come to this meeting with the intention of crowning the great campaigns they have made in the current contest. Both teams know that facing the classic rival gives an extra spice to this definition and they will bet hard to stay with the victory.

The Gladiators arrived at this stage after sweeping in the group stage: they won their four matches, converted 16 goals and no received none. In the quarterfinals they crushed Platense by 8-0 and in the semifinals they had an even duel against San Lorenzo in which they finally managed to win 2-0 over the final.

Those directed by Christian Meloni want to remove the thorn of not having been able shout champions in the last tournament. In that contest they were first until the competition had to be terminated as a result of the coronavirus pandemic. The cast of la ribera, the most winning in the history of national women’s football, has not been crowned since 2013.

River is in search of the title after having a great performance in the group stage. Those led by Daniel Reyes added three victories, with 14 goals for and only one against. Independiente was the rival they dispatched 5-0 in the quarterfinals. Later, they got rid of UAI Urquiza in the semifinals after winning on penalties (the match had ended 2- 2 in 90 minutes

The last time Gladiators and Millionaires saw each other was the 24 September 2019, by the first date of the last tournament. That day at La Bombonera the locals won by a resounding 5-0. Las de Núñez, whose last title dates back to the season 2013 – 2017, they will seek revenge this Tuesday at the Amalfitani.

In the final not only is the title settled, but which also defines who will rise as the top scorer of the tournament. The Uruguayan Carolina Birizamberri River leads the artillery table with nine conquests, but Andrea Ojeda de Boca follows closely with eight.

The match is played behind closed doors at the Vélez stadium and if after the 90 minutes the tie persists, it will be defined by penalties.

The transmission is in charge of the sports signal TNT Sports , which in the final of the Maradona Cup between Boca and Banfield presented its new aesthetic. In addition, it became regional by integrating the signals of Brazil and Chile.

Has more goals that Palermo and 22 titles: Andrea Ojeda, Boca’s forward who wants to expand her legend against River

Carolina Birizamberri, the scorer who has a Marcelo Gallardo motto tattooed and who dreams of taking River to glory against Boca

Lucía Martelli, veterinarian and figure of River: the scorer who entered the world of football almost without looking for it

Previous Post
Exporters call for expansion and overhaul of ‘invaluable’ freight subsidy
Next Post
Chlef: material losses in a fire in a house in Al-Abyad Majajah Center