Dancing in the Mosque: An Afghan Mother’s Letter to her Son, by Homeira Qaderi (2020), translated by Zaman Stanizai 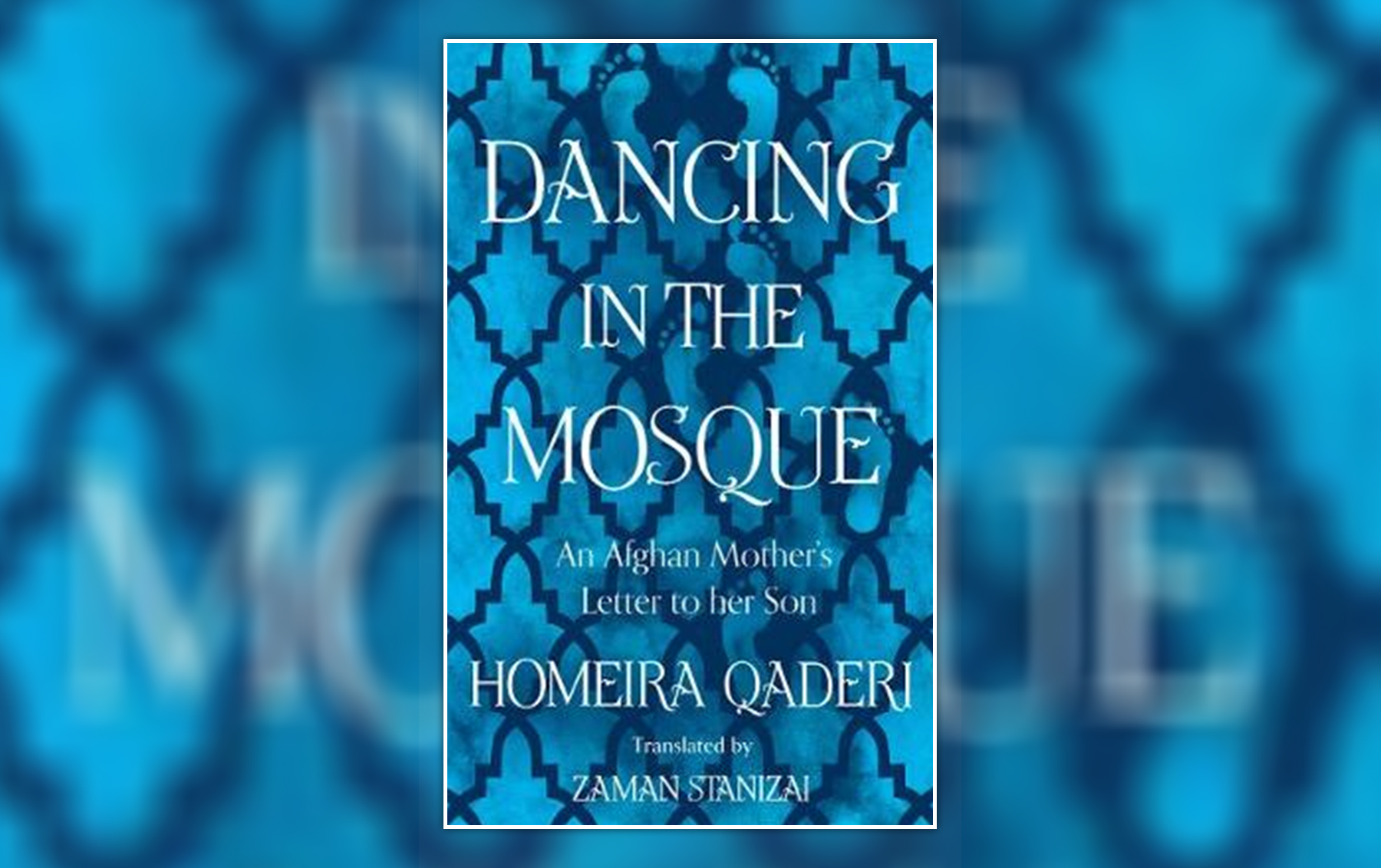 When I began volunteering at the Afghanistan & Central Asian Association (ACAA), I started to make my way through a list of books dealing with recent Afghan history. None has been as enlightening as Homeira Qaderi’s poignant new memoir, Dancing in the Mosque: An Afghan Mother’s Letter to her Son, published towards the end of last year. This is perhaps because the author is herself an educator, one who gives us numerous life lessons in her heartbreaking, first-hand account of growing up under Soviet occupation and Taliban rule.

Qaderi was fortunate enough to be part of a close-knit family as a child. She can remember her beloved grandmother, ‘Nannah-jan’, offering some frank advice early on – ‘a girl should have fear in her eyes’ was one particular instruction. Her first enemy was the Red Army with their ‘invisible bullets’, bombarding her hometown of Herat when ‘our Mujahideen’ were bravely fighting the invaders. Qaderi recalls the danger of going outside amidst the sound of fighter planes and gunfire, on one occasion witnessing her aunt being shot in the eye whilst trying to run for shelter. Surrounded by rubble, she even catches a Russian soldier assaulting their neighbour’s daughter after an air raid. These moments are described with brutal candour, reminding us how painfully normal violence becomes for youngsters in wartime. Soviet atrocities continue until they leave in February 1989, but life for Afghan women goes from bad to worse when the Taliban take over.

Qaderi’s extraordinary courage shines through in her teenage years. Once the Taliban insurgency turns into a fully-fledged regime, she notices how life has become more limited than ever. No woman is allowed outside unless fully covered and accompanied by a man. Girls must not be educated under any circumstances. But Qaderi and her family will not be battered into submission, even as they see recusant child brides being sold to bearded Talibs. They start holding secret classes for local children, all of them keen to learn how to read and write. Dancing and singing, both now crimes of blasphemy, are soon added to the forbidden syllabus. It is during these lessons that Qaderi begins to find her voice as a teacher. She develops a powerful activism and remarkable grit, all of which adds to her charisma as a narrator. Stanizai’s translation does a magnificent job throughout of bringing her beautiful prose to life.

As the title suggests, Dancing in the Mosque is like an epistolary novel, with letters to Qaderi’s son, Siawash, closing each chapter to frame the book’s narrative. They are written from afar in present-day California, conveying Qaderi’s unbearable pain at being removed from her child. One letter details the moment she listens in to a family court verdict from Kabul – ‘this woman is no longer a mother’ are the words which echo down the telephone. The Taliban’s assault on women’s rights goes beyond closing girls’ schools; it erases this mother’s identity altogether. And yet by expressing her agony in these letters, Qaderi voices the pain of the entire Afghan diaspora, mourning the loss of their homeland. She looks back in horror at what has happened to her war-torn country.

Education becomes the central theme of Qaderi’s message, not just as a human right but as a lifelong endeavour. She is constantly expanding her intellect, even though she risks her life in doing so. Eventually her talents are confirmed by the popularity of the stories she publishes, although her family fear the wrath of Taliban censors if her name appears anywhere in print. In 1990s Afghanistan, women have all but disappeared from public view.

It is a cruel irony that Qaderi’s liberation comes from an arranged marriage, one that takes her to Tehran where her husband is a student. To her, the Ayatollah’s strict regime is a paradise, even allowing her the privilege of walking alone outside. But Qaderi’s brief period of happiness is short-lived, after she refuses to accept her husband’s polygamy and is forced into exile. Although she loves her son very much, she ‘cannot die under a blanket as an angry, pitiful, desolate woman’ – the fight for women’s rights is too important.

Indeed, this determination is what makes Qaderi’s account so inspiring. Neither she nor her family ever loses their sense of purpose in the face of adversity. They see the burning injustices around them, all the while keeping faith that beyond this misery is a world where women and girls are treated with dignity. Such resilience is a testament to their strength of character; a refusal to conform to the demands of their oppressors, even when situations appear utterly hopeless. And whilst nothing will ever relieve the suffering that Qaderi and others have been through, she ultimately believes her struggle will not be in vain. After all, as Nanah-Jan tells young Homeira, ‘in this land [Afghanistan], it is better to be a stone than to be a girl’. Perhaps one day, for the sake of all Afghan women, this will no longer be the case.

Thomas Peet is a legal affairs intern at the Afghanistan & Central Asian Association (ACAA). He graduated from Oxford University in 2018 and is a future lawyer.

The post Dancing in the Mosque: An Afghan Mother’s Letter to her Son, by Homeira Qaderi (2020), translated by Zaman Stanizai appeared first on 8am Newspaper.