Suspension of the PASO: the condition put by Alberto Fernández and the substantive dispute of the governors with Kirchnerism 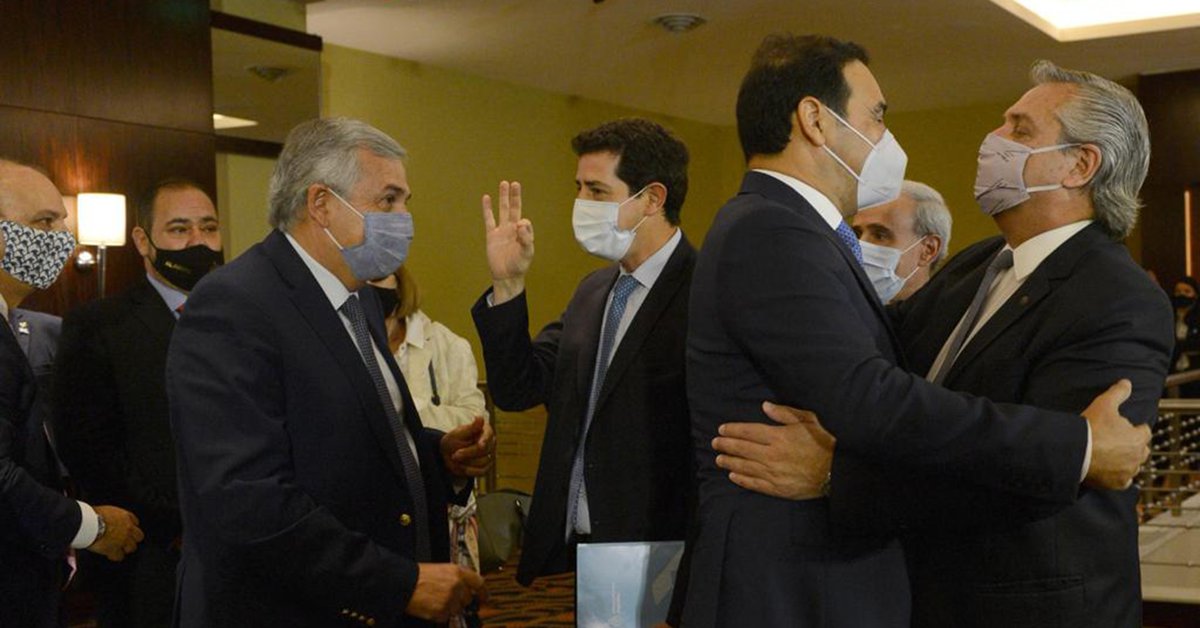 The Last Wednesday, in Chilecito, La Rioja, the president Alberto Fernández heard again from the governors the same request that had already been made known to him on December 4, when they met in Olivos after signing the fiscal pact. The leaders want the STEP to be suspended this year .

The argument they present is the enormous economic expenditure which implies electoral logistics, in a context of deep economic crisis, and the need to avoid crowds and mass circulation of people at the time of voting so as not to hinder the health scenario.

In the first days of December the ped gone was 21 governors over the 24 that Argentina has . This week the claim was made by those who govern in the North. Ten leaders, from the Front of All and Together for Change, made a joint request. Those who put their faces were Raúl Jalil (Catamarca), Jorge Capitanich (Chaco), Gildo Insfrán (Formosa), Ricardo Quintela (La Rioja) Juan Manzur (Tucumán), Gerardo Morales (Jujuy) and Gustavo Valdés (Corrientes). Also there were the vice governors Carlos Arce (Misiones), José Neder (Santiago del Estero) and Florencia López (La Rioja).

Those who were present, they are not the only ones in favor of suspending the STEP. Gustavo Sáenz (Salta) not only spoke in favor, but was the first to suspend the primaries in his province . As soon as November began Sergio Uñac (San Juan) asked that the suspension be evaluated. They are joined by Omar Perotti (Santa Fe), Juan Schiaretti (Córdoba), Gustavo Melella (Tierra del Fuego), Oscar Herrera Ahuad (Missions), Sergio Ziliotto (La Pampa) and Omar Gutiérrez (Neuquén).

The consensus is majority, but not total . The agreement is missing key pieces. Axel Kicillof (Buenos Aires) and Horacio Rodríguez Larreta (Autonomous City of Buenos Aires) did not join the order . Between both districts they gather more than 40% of the electoral roll. Without them, suspending the PASO would not have a marked impact.

In dialogue with Page 11 , the governor of Buenos Aires spoke about the issue for the first time and clarified that “it is not a priority” for its management : “It is a debate that for me does not depend on the issue of costs or political convenience, basically there is a law and an epidemiological issue,” he said. He also admitted that it would be difficult to repeal them because in Buenos Aires there is its own STEP law and the ruling party does not have a majority in the Chambers: “The discussion necessarily involves the opposition,” he closed.

If you want to suspend them, you should have the approval of the Buenos Aires Legislature. The project would go through Deputies without problems, but it would stagnate in the Senate , where the opposition is a majority.

Rodríguez Larreta has already expressed his decision that the PASO be carried out with total normality. In addition, it would be a contradiction to enable the classes, with the urban movement that it entails, and manifests itself against the primaries. The head of the Buenos Aires government is the most outstanding leader of the opposition and in most of the space they do not want the elections to be suspended. The account has a simple result. It cannot go against the grain.

The governors know that it is difficult to turn the PASO without a political agreement that includes Buenos Aires and Capital Federal. For the law to be approved they need a special majority. That is, half the total body of the cameras. 129 are needed and 37 Senators.

In the upper house, reaching consensus is easier because the provinces have more weight. They are two representatives of the provincial government and one of the opposition. In the Chamber of Deputies the situation is more complex. There are 70 deputies representing the Buenos Aires territory, of which 37 are of the Front of All. Without the opposition, which would vote overwhelmingly against the suspension, their votes are key to getting the law passed.

The negotiation it will be transversal. Province by province. You cannot negotiate en bloc. In Together for Change there are different positions. Morales and Valdés want to suspend them. Rodolfo Suárez (Mendoza) told his colleagues a short time ago that his intention was to lower them, but his partnership with Alfredo Cornejo , former governor and prominent figure of the hard wing of the opposition, forced him to have a less defined position: where there is competition, the PASO should be made, where there is none, that

The governors are planted in a position that they agreed on and that has a background of interests politicians. They differed, once again, from the political objective of Kirchnerism , majority partner within the coalition. The ruling party had the support of the opponents. There is no crack in the request for suspension of the primaries.

The governors, provincial officialisms, do not want Kirchnerism to try to mark them the court in its provinces . Especially the Cámpora, the ultra K group that has been gaining places in all the steps of the State and that wants to grow in territorial volume on the way to 2021.

The leaders want to reduce expenses and ensure full power in the formation of the lists. But they are only one part of the coalition. The K sector seeks to position its candidates. It is a logical political decision from the camper perspective. Growing up is synonymous with power.

At the meeting held in Olivos, Alberto Fernández empowered the leaders to move forward with the initiative. A week later the national deputy Pablo Yeldlin , right hand of the governor of Tucumán, Juan Manzur , presented a bill to suspend the PASO that was signed by legislators of 15 provinces . The intention of the leaders was to issue a joint statement that would expose the consensus, but the publication never arrived.

In the course of January the governors expected a wink from the President . They wanted me to add it to the agenda of the extraordinary sessions that began on January 4 and end on 28 February. With no answers until last Wednesday, they came back face to face. Two days later they had the answer. The Head of State included on the agenda that the Congress must deal with the project during the extraordinary sessions to suspend the STEP.

The inclusion of the project was a message in itself. Fernández once again endorsed the political will of the governors, but the road is long and a large consensus is needed to finalize the suspension. The President entrusted them to the provincial leaders and dissociated himself from the possibility of leading the negotiations to build an agreement between the governors and Kirchnerism.

Alberto Fernández is willing to enable the suspension of the PASO, but he has one condition: he wants the governors to guarantee the votes for it to be approved. You know beforehand that most of Kirchnerism will not support the project and that the legislators of Buenos Aires would not accompany without a prior agreement in which Kicillof agrees to lower the national elections, knowing that he will have to carry out the provincial elections due to the internal limit of the opposition.

So, it’s the The leaders themselves who have to do the fine numbers to know if they have enough power in Parliament to achieve the suspension. In the meeting they had in Chilecito, the head of state already anticipated that there must be consensus in Congress for the law to advance. A priori, this consensus is not possible. The numbers are missing. A political agreement is needed that includes Buenos Aires.

There are two theories that governors have and that lead them to request the suspension of the STEP, beyond spending and the health situation. They consider that if there are no primaries, the elections are more fragmented by the forces that participate and extreme polarization is avoided that, in short, can harm the provincial officialisms . Otherwise, the PASO serve as a survey that, depending on the results, may end up modifying the electoral result of the general elections.

The other idea that revolves among the leaders is that with the STEP facilitates the electoral assembly to the opponents. The primaries allow the opposition to organize themselves and arrive with a single candidate for the general. Then again polarization comes into play. All the votes against the officialdom may rally behind the opposition. If there is no STEP, the difficulty for internal arrangements in the opposition village increases and there is the possibility that they will fragment and present more than one candidate.

Fernández is clear about the scenario in his head and move accordingly. His party also plays, as do the governors and Kirchnerism. He will not lead the negotiations. He said it knowing that the agreement is extremely difficult and that the numbers are not there. He gave them the political endorsement knowing in advance that the negotiation is a tangle of interests difficult to unleash.

With that decision it is good with the governors, because it supports them to advance with the initiative, and also avoids a conflict with Máximo Kirchner , who wants his political space to gain power beyond the Buenos Aires borders. done so far, the President is betting on internal balance, but the losers accumulate debts in memory and, in the future, they can pass bills.

The governors are albertism without a label . The mattress on which Fernández relies to survive in the complex internal relationship he has with Cristina Kirchner . If you do not seek an agreement that meets the needs of the majority of the country’s leaders, you will be in debt. Just in an electoral year, where Kirchnerism seeks to grow within the state apparatus and gain even more volume within the Frente de Todos.

Within There are two majority sectors of the government coalition: the PJ governors and Kirchnerism. One of the two will lose the pulse . Fernández must decide what role he takes in that dispute, beyond his will to balance wills and interests. Your decision, pragmatic, hidden or exposed, will end up tilting the balance. At least, that is what the governors of the President who supported to arrive at the Casa Rosada hope, after turning the face of Cristina Kirchner for three years.

The Government is preparing another flight to Russia for this Sunday: they would bring 600 thousand doses, the maximum allowed so far