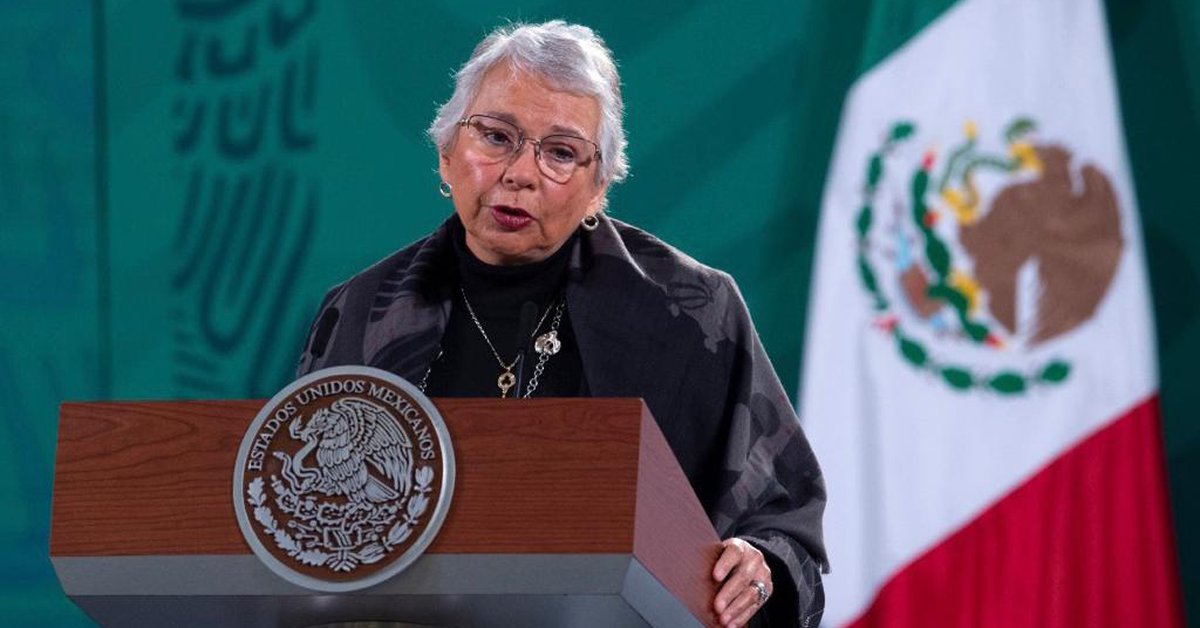 The secretary of the Interior, Olga Sánchez Cordero, offered from the National Palace the usual morning conference of the president of Mexico, Andrés Manuel López Obrador, to replace the president, who this Sunday reported that he was infected with Covid – 19.

“ As you know, the President of the Republic has a positive result to the Covid test – 19, which means that he contracted the disease and as he himself made known, he has developed mild symptoms, so a prompt and satisfactory recovery is to be expected.In this sense, the president has ordered that, as Secretary of the Interior, I take charge of your representation solely and exclusively to continue with this exercise of accountability that are the morning conferences, ”the official stressed.

Sánchez Cordero stressed that López Obrador continues to work remotely, and continues to lead the government of Mexico.

“It is very important to emphasize this point, the instructions given by the president are clear and precise attend the public affairs that he himself indicates to continue informing the people of Mexico about the situation in which our country is in these areas. The president is a public servant committed to the people of this great country, so even in these circumstances, he continues to remotely direct the efforts of this fourth transformation of public life in Mexico.

The Secretary of the Interior assured that the Mexican president is “well and he is strong ”, solving and attending to public affairs, such as the telephone conversation that he will have with the Russian president, Vladimir Putin.

“The president of all and all Mexicans is one, President Andrés Manuel López Obrador, and It should be clear: is in full office as President of the Republic, and he himself will continue to monitor public affairs, as he did this tomorrow and how he will do it in another moment with the call he has at eight with President Vladimir Putin; I think we can say with all sincerity and frankness that he is well, strong and resolving and attentive to all public affairs, and coordinating and attending remotely some meetings and will continue to give the necessary instructions, “he said.

Sánchez Cordero took the opportunity to call on Mexicans to continue to take care of each other and follow the health recommendations, and reiterated the speedy recovery of López Obrador.

“I call on the population to continue to abide by the health recommendations, the president is stable and soon, very soon he will recover ”, he indicated.

López Obrador, 67, announced on Sunday that he tested positive for coronavirus and that he has “mild” symptoms after a tour of San Luis Potosí and Nuevo León, while some members of his cabinet, such as the Chancellor, Marcelo Ebrard or the Secretary of Economy, Tatiana Clouthier, were confined for having been in contact with the president.

Sánchez Cordero confirmed this Monday that the president has developed “mild symptoms”, so “a prompt and satisfactory recovery is to be expected” .

She also stressed that she will replace the president “exclusively” in the morning press conferences that he offers every day at seven in the morning.

According to the Ministry of Health, López Obrador is “stable” and “sheltered at home”, located in the National Palace, where he lives with his wife, Beatriz Gutiérrez Müller.

A multidisciplinary team of specialists ialists in immunology and infectology, led by the Secretary of Health, Dr. Jorge Alcocer, is keeping an eye on the Head of State.

Likewise, it is being tracked to contacts that were recently with the president within two meters and for a minimum period of 20 minutes.

López Obrador spent the weekend on a tour of the north of the country, where he coincided closely with the governor of Nuevo León, Jaime Rodríguez; that of San Luis Potosí, Juan Manuel Carreras, and several members of his cabinet.

Sánchez Cordero herself was with the president on Saturday and on Sunday she gave negative to the rapid test, while between today and Tuesday he will have the result of a PCR.

“Like other members of the cabinet, I will be waiting of PCR test results. If it is negative, we will have to carry out another one next Wednesday, for that reason I will be working from home until I know the results, ”Foreign Minister Ebrard announced on Monday. On Sunday night Clouthier explained that she will stay “a few days at home” because of “responsibility”, as did Clara Luz Flores, the candidate of the ruling Morena party to the government of Nuevo León, who had breakfast with the president on Saturday.

Although López Obrador has defended from the beginning that scientists should design the strategy against the coronavirus, he has also starred in controversies, such as when he said he was protected by a religious stamp, when he has questioned the usefulness of the mask or when he has hugged and kissed fans on his tours.

Previous Post
Forscher benennen Schneckenart nach Greta Thunberg
Next Post
Chlef: The death of a person being run over by a train on the balcony