The suspension of the PASO and the pardon of politicians imprisoned for corruption: the internal arm wrestling that exhibits the differences in the Government 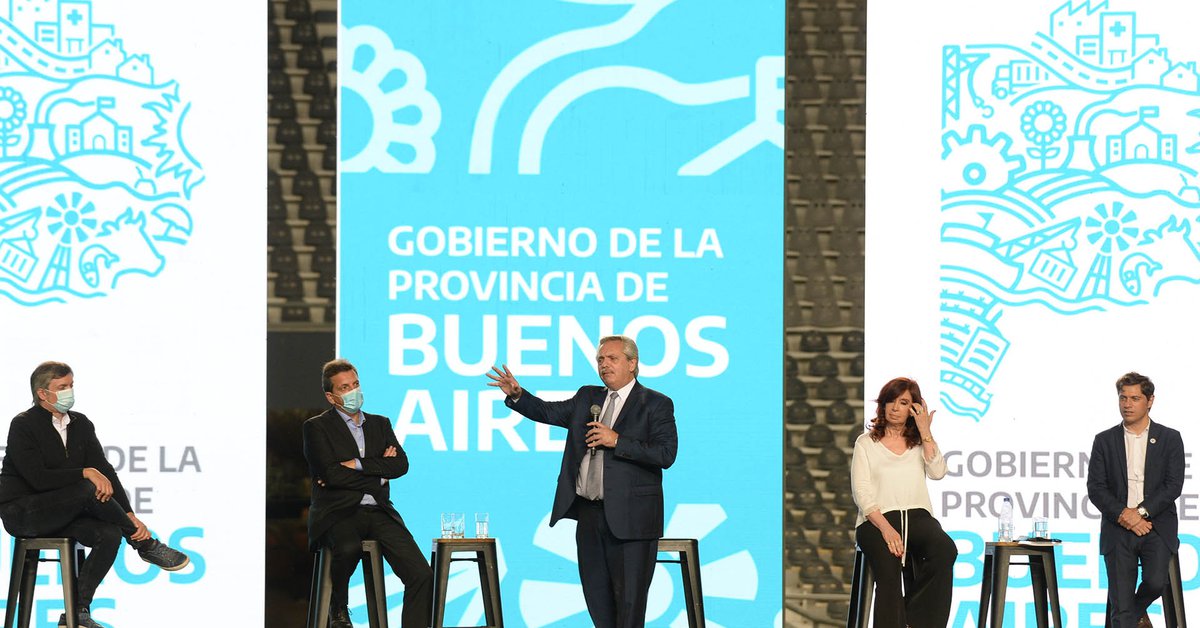 Coexistence is complex. No one denies it within the Front of All. They assume it naturally, although, most of the time, they seek to lower the tenor of internal conflicts by relativizing the importance of the differences they have. The last weekend in government, two different and well-marked paths were exposed again. The same government, different positions and a President who seeks balance with obsession.

On Friday night, Alberto Fernández included on the agenda of the extraordinary sessions of Congress the bill that suspends the STEP. It was a direct nod to the governors – from all political fronts -, that had been tenaciously demanding the debate to lower the elections, a fact that Kirchnerism looks with qualms because they want them to develop normally.

Behind the project to suspend the PASO there is a clash between two strategic partners within the Frente de Todos: the governors of the PJ and La Cámpora. The leaders have plenty of reasons for not wanting to be carried out The elections. Some political and others epidemiological. Some that were raised in front of the President and others that circulate in private conversations between them.

At the political level they consider that the suspension of the PASO avoids polarization in the general elections and benefits them as provincial officialisms. Since they were installed in the electoral system, the primaries have become a kind of poll that faithfully anticipates what the result of the general election will be. Second, they understand that if they take the STEP, they force the opposition to discuss a candidacy for unity to confront the ruling party. This discussion can – there have already been cases – lead to two candidates from the same political space.

In the health field, warn that the massive circulation of people to comply with the electoral act will multiply the risk of contagion . By August, when the elections would take place, Argentina would be in the process of vaccination. An operation carried out during the winter, when respiratory diseases flare up again, is in itself a logistical complication. Especially considering that the Government’s intention is to leave behind, through the advance of vaccination, the possibility of implementing strict isolations, which implies that the movement of people is almost normal.

In addition, the need to reduce the expenses involved in the logistics of the electoral system is added. In the event that the STEP is made, the expense is double. The leaders asked the President to suspend the elections on two occasions. They were planted on the political scene with a joint position. In Peronism, the position is much more than a simple strategic or health objective. There is a substantive dispute with Kirchnerism, which intends that the elections go smoothly. They also have their reasons. They want to gain places in the different echelons of the State and grow territorially at the federal level.

The governors of the PJ and La Cámpora are partners by convenience, not by conviction. They don’t believe in the same way of doing politics. They have different views on the foreign policy that Argentina should carry out and interpret the link with the red circle with very different nuances, to give just two examples. They are two different political projects that came together to be able to unseat Mauricio Macri from power. The objective was accomplished. But, as they knew in advance that it was going to happen, the coexistence becomes complicated as the months pass.

The governors would not have tried to expropriate the Vicentin company , nor would they seek condescending definitions to describe the authoritarian government of Nicolás Maduro in Venezuela. Nor would they harshly question businessmen in public or wage a battle against the agricultural sector. They would not ask for the release of Amado Boudou, who is condemned in different judicial instances, nor would they speak of political prisoners. They are two different views on the same reality. They are two governments within one.

One year before the elections around 10 governors, together with Sergio Massa , created Federal Alternative, a political space, with a Peronist stamp, which sought to transform itself into a political alternative to Cambiemos, but without the leadership of Cristina Kirchner . The provincial leaders joined that scheme with the clear intention of leaving the current vice president buried in the past. They do not reconcile with their forms or their ideas. Everyone respects her intellectually, but they do not feel like Cristina’s Kirchner.

The decision to elect Alberto Fernández as president was decisive for those same governors to support her the formula of the Front of All. They were pragmatic, even having fought small battles with Kirchnerism in their provinces for the conformation of local lists and in the elections. This time they stood on the sidewalk in front of Kirchnerism and are waiting for the President to back them up. They do not want La Cámpora to take over the provinces.

The discussion about the suspension of the PASO was one of the points of conflict in the coalition during the end of week. The other was Massa as the protagonist. The leader of the Renewal Front and owner of a significant percentage of shares in the government coalition, marked the field with a definition of pardon. “An amnesty for corruption cases would be absurd and a big mistake” , said in an interview with El País.

The statement was a very clear message for the Kirchner sector that is pressing for the release of former vice president Amado Boudou and the leader of the group Tupac Amaru , Milagro Sala. “On my part, there is no chance to discuss an amnesty, just as I believe that the President has no vocation to discuss a pardon. Justice is the one who acquits or condemns ”, he stated. He established an important position within the Frente de Todos to counteract the weight of the will K. A play on words and speeches reflected in the media.

Fifteen days ago leaders of Kirchnerism, former presidents of different Latin American countries, actors, journalists and national government officials signed one requested to demand the freedom of Boudou. “The political persecution against militants and leaders of the Kirchnerist experience persists in Argentina despite the popular victory in the last elections ”, indicated in the letter that was published and that was signed, among others, by Mayra Mendoza, Jorge Ferraresi, Luana Volnovich, Hugo Yasky, Leopoldo Moreau, Andrés “Cuervo” Larroque, Eduardo Valdés, Norma Dur Ango and Daniel Gollán.

The text demanded “the freedom of Amado Boudou and of all political prisoners “ so that” in Argentina justice rules fully and human rights are respected. ” The conviction of the former vice president for the Ciccone case was confirmed by the Supreme Court on December 3 of last year. On 31 of the same month, the Criminal Execution Judge Daniel Obligado ordered his return to jail . The decision unleashed anger in the K sector.

Before the festivities, Kirchnerist groups asked for a “Christmas without political prisoners” and they demanded the release of former officials of the Néstor and Cristina Kirchner governments detained for causes of corruption . Closer in time, during the past week, social and political organizations linked to Kirchnerism marched to the Courts to request the release of Milagro Sala. It was under the slogan “The Court, dump of democracy” . That is why they decided to throw hundreds of garbage bags at the entrance of the courthouse.

In this context, the definition of Sergio Massa must be interpreted, who, like the governors, has always had great differences with the K sector . The decision to publicly explain its position on a possible amnesty is nothing more than a dagger to the ambitions of the toughest Kirchnerism. Each one fixes his position in the political field and tries to influence opinion or, minimally, prevent the image of the entire government from being associated with a single idea.

Alberto Fernández has already ruled on the amnesty to which in Kirchnerism consider that they are political prisoners . It was the beginning of January. “I assign a central value to the word and I campaigned saying that retirees were not going to pay more for the remedies and I complied with it, I promised the law of voluntary interruption of pregnancy and I fulfilled it, and I said that I was not going to issue pardons and I will comply with it ”, he specified. It was forceful to try to close the issue.

The differences within the Frente de Todos once again flourished in two central issues on the political agenda. They will multiply over the next few years. The important thing is not the different views, but which ones prevail in the management walk. These signs are, ultimately, those that define the identity of the government and the political project that the President is trying to translate.

Suspension of the STEP: the condition set by Alberto Fernández and the substantive dispute of the governors with Kirchnerism

Massa demanded the return of the presence in schools: “ classes have to start with the boys going to school ”

Previous Post
Family fined $70k after undercover black market lobster sting
Next Post
Attar: These are the conditions for an increase in the price of a barrel of oil in the future, and it will not be before 2023