In front of his wife, thief shoots a man for stealing his motorcycle 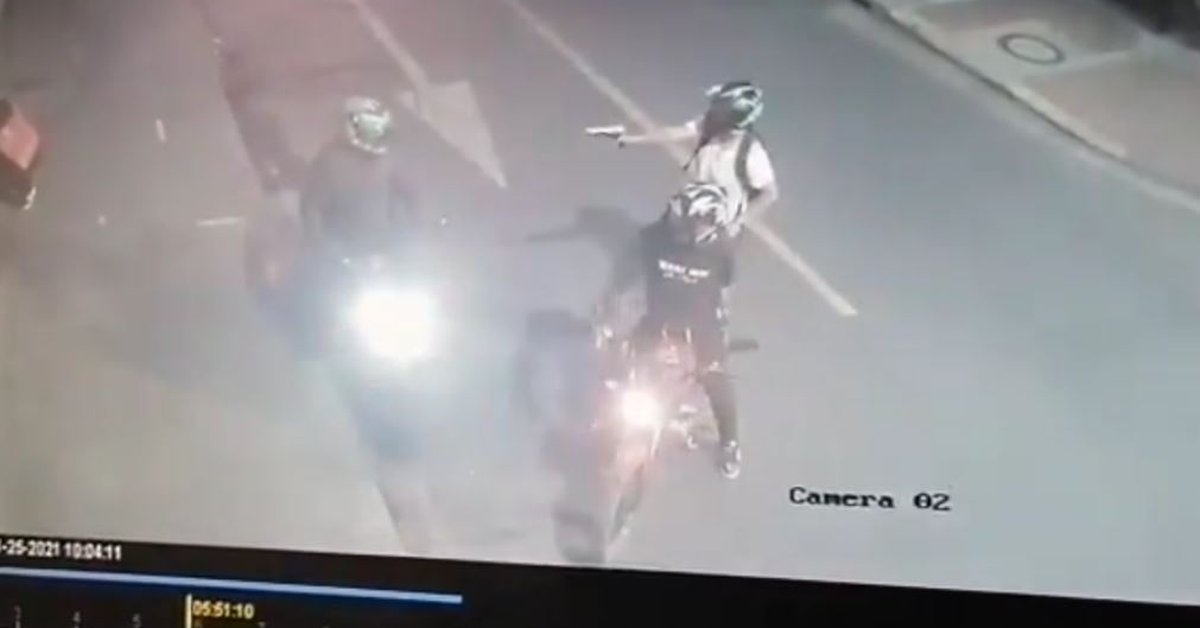 This Monday the journalist Johnatan Nieto Blanco of the Citytv channel shared a video in which reported how an assailant shot a man who was apparently taking his wife to work in Bogotá. It can be evidenced how two men steal his motorcycle and shoot him, despite the fact that he never resisted the robbery.

The clip that a camera captured Security can be seen as the man transports a woman who gets off the motorcycle in the Condado Castillo neighborhood, in the town of Kennedy, west of Bogotá and where minutes later two men approach on a motorcycle and approach the man pointing at him a firearm. He raises his hands, adjusts the motorcycle and gets off, without resisting the robbery. However, the man who finally takes control of his motorcycle shoots him for no reason. Later the woman helps him and it is seen as they wait for someone to transport them while they sit on the platform.

El Tiempo learned that the victim’s name is Jorge Ramírez from 42 years and that he was transferred to the Clínica de Occidente, where he remains with a reserved prognosis. Juan Bermúdez, a relative of Jorge, told Citytv that even though he avoided being shot, he was shot in the chest. His relatives expressed that they hope the crime does not go unpunished and that he recovers soon to see his three daughters again. ” It can happen to anyone, we demand justice, “the man told Citytv. According to the relative, they take that route every morning to drop off his wife at work.

Here is the video:

The District Oversight Office reported that between January 1, 2020 and the 31 October of that year were reported 57 homicides for robberies in Bogotá. It also revealed that there were 816 murders, mostly by hitmen, followed by fights and muggings. He also warned that the reduction of these crimes occurs in the middle of quarantines and that strategies must be reinforced after each day of confinement in the city. “ In the previous year when the quarantines were ended, crimes increased in each of the towns of Bogotá,” they stated.

Thefts in Bogotá were reduced by 2020

The figure decreased compared to 2019. In 2021 thefts from persons, residences , cars, cell phones and motorcycles, due to different factors, such as the situation of the previous year.

According to the Secretariat , in the first period that was determined until 20 of March, when the isolations began, there was evidence of a reduction in thefts, especially of persons, compared to previous years, however, homicides already showed an increase, including the murders that occurred in the riot at the Modelo Prison, the 26 last March.

During the second period established by the Security authority, framed by the isolations and the strict quarantine, the entity recognized a decrease in most crimes due to the restrictions on the mobility of citizens and the atypical normality during the two months.

In this period there was the highest increase in theft of bicycles of the citizens who found in the means of transport an alternative of mobility and prevention against covid – 19.

“It is inevitable to recognize that, despite the figures, which are official and those recognized in Colombia and around the world for measurements and public policy decision making, the perception of insecurity is real and is fed by real facts. Therefore, it is undeniable that in the case of Bogotá there have been painful criminal actions that deserve all social and institutional rejection ”, indicated the Secretariat in the balance sheet.

In photos: the arrival of the hearse of Minister Carlos Holmes Trujillo

Previous Post
Irland verlängert Lockdown bis zum 5. März
Next Post
Djelfa: The Minister of Vocational Training stresses the need to include the two specializations “Aquaculture and Railways” within her sector