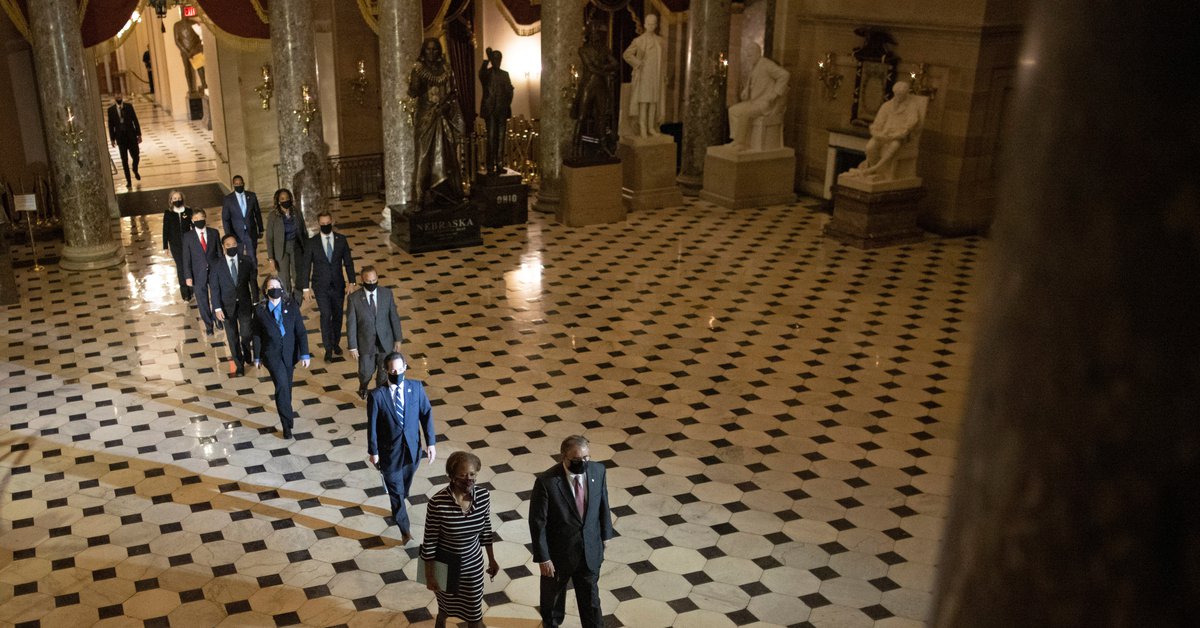 The United States House of Representatives accused formally this Monday the former president, Donald Trump, to incite an insurrection to his followers before a deadly attack on the Capitol. In this way, he formally began the process of his second impeachment.

The nine Democrats of the House of Representatives who will serve as prosecutors crossed the Capitol, where On January 6, hundreds of Trump supporters clashed with police, leaving five dead, bringing the impeachment article to the Senate where Trump will face trial.

A similar ceremony was held for Trump’s first impeachment trial last January , when the House Clerk and Sergeant at Arms spearheaded a small procession of legislators through a silent Capitol.

The milestone marks two historic firsts: Trump is the only president of the United States who has been indicted by the House twice and will be the first to face trial after leaving office . Conviction in the Senate could result in a vote to bar him from future office.

The leaders of the Senate, which is divided 25 – 50 with a majority for Democrats thanks to Vice President Kamala Harris’ tiebreaker vote, they agreed not to start the trial until February 9 .

That gives Trump more time to prepare a defense, and allows the House to focus on top priorities of President Joe Biden, including cabinet appointments. The president, who had avoided giving his opinion on the process – repeatedly indicated that it should be determined by the Senate – finally was in favor of taking place . “It must be done,” he told CNN shortly after the delivery of the article took place.

After a two-month campaign to try to discredit his electoral defeat, Trump on January 6 urged his supporters to “fight” to reverse the Outcome. “They will never get our country back by being weak,” Trump told protesters shortly before the attack on Capitol Hill, which left five dead. “They have to show strength.”

A significant number of those who heard the speech later made up the mob that descended on the Capitol, prompting legislators to seek shelters and delaying the formal Congressional certification of Biden’s victory several hours.

Ten House Republicans joined Democrats in voting to impeach Trump. Senate Democrats will need the support of 17 Republican support to convict him, a unlikely fence given Trump’s continued popularity with Republican voters . However, some sectors of the group see an opportunity to limit Trumpism in the face of the next elections.

A survey of Reuters / Ipsos on Friday found that the 51% of Americans thought the Senate should convict Trump . Among the ranks of the party, the situation was different with less than two of each 10 Republicans agree.

In December 2019 Trump had been indicted for “abuse of power” and “obstructing the proper functioning of Congress” for alleged pressure to Ukraine to hurt Biden. But he was acquitted on February 5, 2020 by the Senate, then a Republican majority. At the time, only Mitt Romney voted to convict him.

Romney has also supported the process, although he has not publicly commented on his vote. And the party’s leader in the Upper House, Mitch McConnell , has been extremely critical of Trump in recent days and has not ruled out voting in favor of His sentence.

That is not the case for many other Republicans. “I find this judgment stupid,” noted Republican Senator Marco Rubio on Fox Sunday. “The country is already on fire and it’s like putting gasoline on this fire ”. Others even hope to completely block the trial, declaring it unconstitutional to try a former president.

(With information from Reuters)

MORE ON THIS TOPIC :

“We can’t wait”: Biden wants Congress to approve the $ 1.9 trillion plan to face the pandemic as soon as possible