During Kovid, drugs at the factory dropped three to four times, but the market price rose 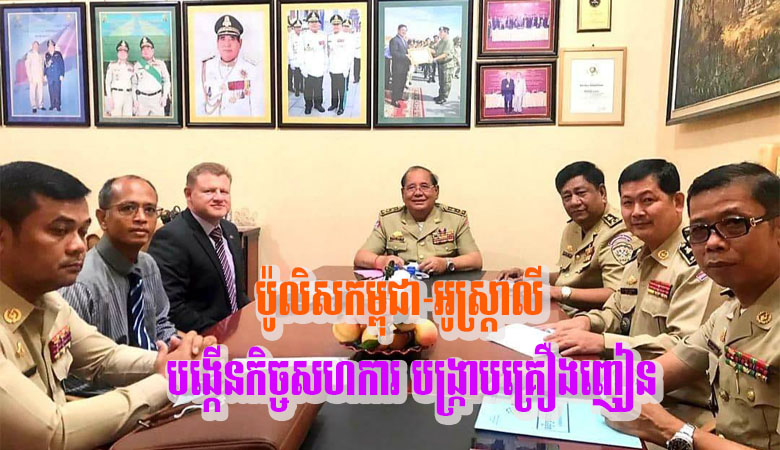 Meeting in Phnom Penh on February 3, 2021, representatives of the Cambodian and Australian police discussed four main points, including:

1- Both sides highly appreciated the progress of cooperation between the National Police of Cambodia and the Police of the Australian Federation in the past, especially in the Strike Force Dragon project. Outstanding cooperation in exchanging information on cases of detection and suppression of cross-border drug trafficking cases in three major cases in which three groups of criminals confiscated nearly 2 tons of drugs.

2- Discuss and agree to conclude and evaluate the reasons for “more crackdowns but more drug crimes”. This is due to the increase in agricultural production in the world and the region.

During the current epidemic of Kovid 19, Cambodian and Australian police representatives also said that the borders were tightened and closed, blocking the flow of drugs, which criminals have increased production. . At the drug site, drug prices are three to four times cheaper, but at the end of the day the price increases (for example, in the Golden Triangle, a kilogram of methamphetamine costs 3,000 to 5,000 US dollars, but in Australia it costs 100,000 US dollars).

Representatives of the Cambodian and Australian police also said that most of the operations were not cracked down on, so the ringleaders and the remaining targets continued to commit criminal activities. The above reasons make criminals change their tactics in traffic and find a way to export in large quantities.

The police representatives of the two countries also mentioned the strategy to solve this problem: “Investigate the root cause and research to crack down on money laundering” to cut off the chain of activities and financial sources.

3- The Australian police have the experience of cooperating with the Dutch police to hunt down the Chinese drug mastermind (Taiwan) named Tse Chi Lop of the criminal network “Samkor”, which in the past, the Cambodian police also arrested the master A ship sent to Myanmar.

4- Both sides expressed interest in continuing the fight against Kovid, and the Cambodian side also thanked the Australian Government for providing financial assistance to purchase 3 million doses of vaccine.

Both sides agreed to work hard to strengthen and expand cooperation more effectively. On that occasion, to facilitate and promote cooperation, AFP provided five laptops to the five Cambodian police chiefs. By: Khim Bunnak

Previous Post
Antwerp: Didier Lamkel Zé now in the Europa League squad
Next Post
Global warming may be the cause of COVID-19