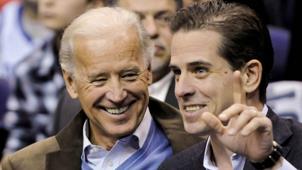 Hunter Biden, the son of US President Joe Biden, will publish a biography in which he talks about his fight against drug addiction that will go on sale on April 6, as announced by the publisher Gallery Books.

The publication of the work, entitled “Beautiful Things”, is known after only two weeks in office by Biden, who spoke about his son’s addictions on several occasions during his election campaign after receiving criticism.

“My son, like many people (…) had a drug problem,” Biden said during an electoral debate in which former President Donald Trump recalled that Hunter Biden was expelled from the US Naval Reserve. in 2014 for testing positive for drugs.

“He has overcome it. He has fixed it. He has worked on it and I am proud of him,” said the president.

According to a statement from Gallery Books, a division of Simon & amp; Schuster, the work “details the descent into substance abuse and its tortuous path to sobriety.”

“I come from a family forged by tragedies and united by an exceptional and unbreakable love,” Hunter Biden writes in the book.

Biden’s son, whose business activities are being investigated by federal authorities, was present at the president’s inauguration ceremony last 20 in January, but has kept a low profile since he won the elections.

Last July, Hunter Biden spoke openly about his addictions in an interview with The New Yorker magazine, in which he said that “everyone faces trauma.”

“There is addiction in all families. I was in that darkness, in that tunnel, and in a tunnel that never ends,” he said half a year ago.

In the extensive conversation, Hunter Biden detailed his alcohol and drug abuse, which included his first cocaine use while studying at the prestigious Georgetown University.

Biden also spoke about his romantic relationships, both with his ex-wife Kathleen Biden, with whom he has three daughters, and with his current wife, the South African Melissa Cohen, whom he married in May 2019 a few days after meeting.

Previous Post
These are the top scorers of all editions of the Copa Libertadores
Next Post
Today in Denmark: A round-up of the latest news on Friday