PEPCA reviews the assets of the former Minister of Finance 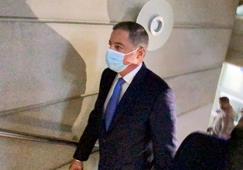 The former Minister of Finance in the last term of government of former President Danilo Medina, Donald Guerrero, must return on Monday at 3: 00 in the afternoon to the Attorney General of the Republic to be questioned about the amounts contained in his affidavit of assets.

Guerrero went yesterday to the Special Prosecutor for the Prosecution of Administrative Corruption (PEPCA), where he was interrogated by the deputy prosecutor, Wilson Camacho.

According to Guerrero, the interrogation was postponed to Monday because he had scheduled commitments yesterday at the time he was to be questioned.

“We began to see the issues related to my sworn statement and we suspended it to continue later for the time and I had a commitment already by this time,” he told reporters as he left Camacho’s office.

Guerrero had arrived close to 5: 00 in the afternoon at the Office of the Attorney General of the Republic in response to a summons from the PEPCA. The prosecutor Camacho will inquire about the handling of millions of pesos during his tenure at the head of the Ministry of Finance. When interviewed by journalists upon arrival at the Attorney General’s Office, Guerrero said that he did not know the reasons for the summons, but that he attended because “a friend told me.” He added that he did not receive the notification for the interview. Guerrero was accompanied by his lawyer Eduardo Núñez.

The former official was summoned by the PEPCA for 2: 00 yesterday afternoon, but he entered the building at 4: 45 of the late.

Guerrero was the Minister of Finance during the last four years of the government of former President Danilo Medina.

He is a member of the Central Committee of the Dominican Liberation Party (PLD) and has been in charge of finances for several presidential projects of the purple party.

The former official has also worked linked to the external sector in support of the PLD and its leadership.

Guerrero has a fortune that reaches RD $ 768, 321, 216, according to his affidavit of assets, in which there are no outstanding debts.

Previous Post
China Sinovac enters procedures in Mexico for approval of Coronavac vaccine
Next Post
The young man insulted a government epidemiologist on the street, his mother confiscated his PlayStation