Bassil launches two initiatives to solve the governmental crisis .. Birth by consensus of the two presidents 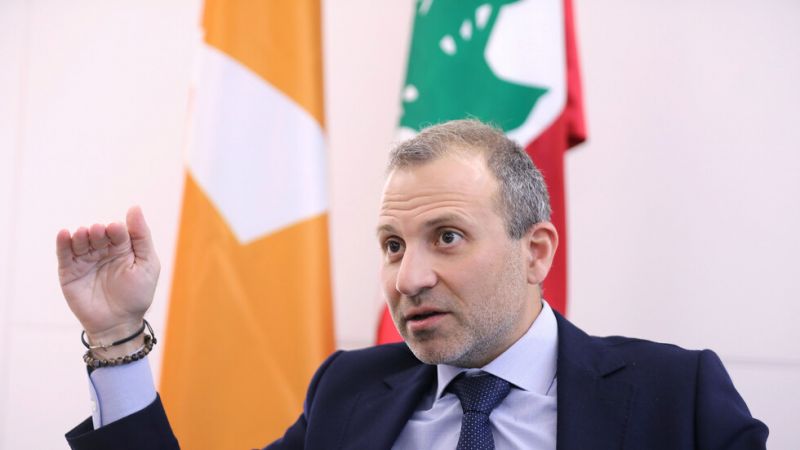 The head of the Free Patriotic Movement, MP Gebran Bassil, launched two initiatives to get out of the government crisis, the first stipulating that the number of ministers be raised from 18 to 2005 It is better for them to raise the number to 22 or 24 in order to respect the principle of competence, while the second decreed that the current should not participate in the government, provided that its conditions for reform are agreed upon, stressing the need for The President of the Republic and the Prime Minister agree on the names of the ministers and to be formed on this basis, denying the demand of the President of the Republic or the National Movement for a third +1 in the upcoming government.

In a televised speech in which he refuted the government file, Basil said of his initiative, “The first thing is to raise the number of ministers from 18 to 20. And this is not going to take a minister.” A Christian more for the president, we will take him to increase the repudiation, but not the prime minister, and it is better if they raise the number to 22 or 24 so that they respect the principle of competence, and no one minister receives two ministries now Relate to each other.
The second thing, with regard to bags, we in the trend only insist on fairness and balance in the distribution of bags of all categories.
Then, as for naming, we looked for one principle that applies to everyone, and they adopted the principle that follows what you want. We are a future in which Hezbollah accepts that it is applied to it.

He added, “When the appointed prime minister says that naming the Sunni ministers is his exclusive right, and he takes from the socialist the name of his minister, and Bintar from the Shiite duo they give him their ministers, then what he accepts is that the formation of the government is subject to the principle of federalism of sects and parties, and if this prevailing principle must apply Christians from the President of the Republic must participate in each group willing to participate.If the Prime Minister proposes that there will be an agreement on the names of Christian ministers on the basis of a King Minister, then there is no objection, but this is the same thing that applies to Muslim ministers. And here is every knot that is created or activated. Parallelism among all, and this is when all problems are resolved, and the government looks forward without stubbornness to any demand from anyone. We will accept what you want, what is important is justice and equality, and at that time we give confidence. ”

He continued, “If they also do not agree on this proposition, we have a second proposal that is easier and more effective. Shiluna to everything and nothing to do with the formation of the government, and take our confidence in the parliament in exchange for our conditions for reform. We are following in the direction of the government, which is reform and we will not participate in it.” Give us reform and take the government. Here is a fair bargain: You will take what follows them, and we are the one who will follow them. We will grant us reforms and a future. But we want no promises or guarantees. We want to pay in advance, and this is what we are satisfied with all the Lebanese because reform is for all the Lebanese. (From north to south) And from east to west). And here we will also satisfy the international community by reforming and with the government of Sawa. Our conditions are easy and will be fulfilled one week before the formation of the government, if there is a political will:
1- Capitol Control Act decision. (Set transfers abroad).
2- Approval of the Law to Recover Stolen and Transferred Funds.
3- Adoption of a public service account and property statement law. Hul all of them are present in the House of Representatives and considered, and if in a political decision, in one sitting, they click. During the same week, we began to issue an order to proceed to Alvarez until the criminal audit at the Banque du Liban was censored without any stopping or going backwards, and that is, with the formation of the government, the audit process will begin in parallel with all ministries, departments and councils.
This is what we want from the government and prevent it from trusting the House of Representatives without any demand regarding it.
So, we are part of the problem, a constitutional component, a pact, and a reform component; And the solution seemed to be easier by dismantling it, and we have achieved a government and reform together quickly, and we have opened the door for billions to come.

The President of the Republic and the movement did not demand a third. +1

He added, “Neither the president nor we demanded a third plus one, and we do not lie” nor my voters. “And if we wanted to, we would say it on the top of the roof and wage a battle on it we would be honored because it is our right .. We did not demand a third because the government of independent and non-partisan specialists, the number My theory and it has no meaning!
He said, “It is clear that they want to return to the tune that they take and not give … So it is enough to slander the story of the third plus one, and it suffices to lie to the capitals of the world that we want him to control the government before and after the era, and until Gebran Bassil becomes president …” “Stop fools about the world.”
Bassil considered that “the story is that they want us to return to before 2005 a time of domination of our decision; and they find arguments for their purpose, and always in service providers ready from your own hands. And the real indication of their thinking about returning to this era is their renewed talk about stopping the counting.” He added, “We were brought up on the principle that the Lebanese Muslims preserve for the Christians their full role, even if they became 1%, because they are convinced that they are the advantage of diversity in Lebanon and that the Lebanese Christians chose the Greater Lebanon to live with the Muslims instead of the small country, because Muslims give this added value to the great homeland.” The head of the Free Patriotic Movement said, “What we want today is a government and quickly headed by Saad Hariri and without our participation … Let him be preferred and bear responsibility, he is the one in charge, not us, so let him form a government without us and stop wasting time and throwing arguments on others … Let him form it from specialists with ability On the foundations of justice and the constitution. ”
And he believed that what is delaying the government is internal and other external reasons, considering that the first internal reasons that delay the formation of the government is a departure from the public agreement that happened between us at the table with the French President, which is known as the French initiative, and the second internal reasons are the departure from the principles, rules, constitution and charter … The third reason is the issue of number.

Port blast: to understand the demand to expedite the issuance of the initial report to compensate those affected
The head of the Free Patriotic Movement, touching on the issue of the port explosion, pointed out that “today there is a new judge, and this is an opportunity to expedite the file and correct many judicial errors that occurred. Others, the least of their offense, is intentional killing. ”
He added, “They arrest some of the corpses under the pretext of protecting them from killing, and leave those who brought in the goods and protected them and used a large part of it and left the rest of the parts in a state of exposure to explosion.”
He stressed, “We want the truth and it is unreasonable to leave between the two options of the international judiciary, which we do not know where it will lead us, and the Lebanese judiciary, which is a slowed hour for fear of a terrifying result, a hasty hour in fear of the social media, an hour that is appropriate for sectarian, partisan or institutional balances, and those who play the issue are exposed, be it security or the judiciary.”
He said, “We understand that the confidentiality of the investigation has not been compromised, but there must be an understanding of the requirement to expedite the issuance of the initial report to compensate those affected by the insurance companies and not to delay the issuance of the indictment.”
He continued, “We want a judiciary that is occupied by its conscience, not the media … We want a bold, clean and effective judiciary,” adding, “Oh, judiciary of Lebanon: Move away from us the cup of demanding international judiciary … Restore our confidence in you, promising people hope for the truth.”
He saw that “there are those who cause people pain and exploit it to put pressure on us and break us politically. They know that the people’s pain is our pain … and acute crises reveal the mineral of human beings, and every one, near or far, appears for his truth and morals.”