Kampong Cham Governor Calls on Youth to Stay Away from Drugs 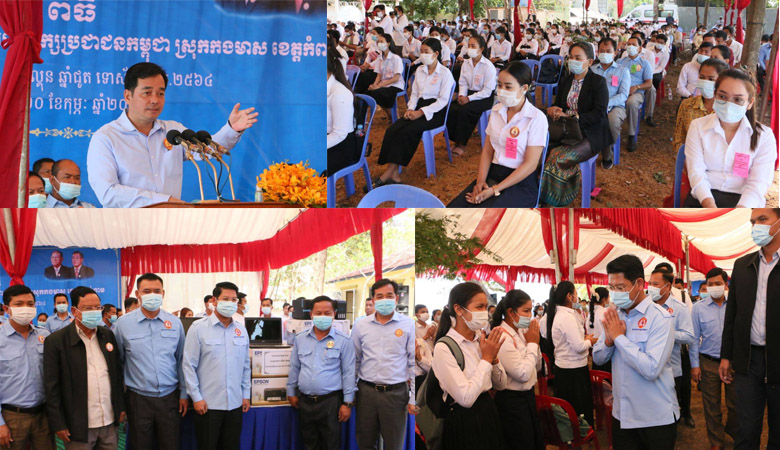 Kampong Cham Province: “Young people who are studying must stay away from drugs so as not to affect their studies,” said HE Un Chanda, Governor of Kampong Cham Province, during a meeting with students, teachers. And hundreds of civil servants in the morning of February 20, 2021 in Kang Meas district next to the Mekong River.

Mr. Phok Savuth, Governor of Kang Meas District, said that in the work to prevent the spread of Covid-19 disease in Kang Meas District, there were 9 positive cases of Covid, which were imported from abroad, including Malaysians. 8 and one Khmer Muslim. As of January 2021, a total of 551 immigrants, 279 females, including 25 foreigners, 2 females, took a total of 239 samples, 76 females, including those who had touched the patient. 117 CIDs, 4 females, will take the second sample for 99 foreign immigrants, 57 females will take samples of 23 people with respiratory diseases to the District Referral Hospital. To prevent the spread of this deadly disease, the commune authorities are strengthening the monitoring of immigrants and returnees.

HE Un Chanda, Provincial Governor, emphasized that drugs have attracted some young people to become addicted to drugs until they dare to do other things, commit robberies and eventually become prisoners.

His Excellency continued that young men and women who are studying in the 12th grade are required to take the exam year, so they must make efforts to study well to pass the exam and continue their studies at various universities because the country under the leadership of Samdech Techo Sen has Development needs human resources.

HE Un Chanda, Provincial Governor, continued to say that young people! Those who are old enough to go and register to vote in 2022, when it is time to vote for the commune / sangkat, must vote for the commune chief who is active and works to help the local people, just like he helped the CPP. Cambodia. Every year, Kampong Cham Provincial Administration has scholarships to help poor students study at universities in Kampong Cham, including Western UME and other universities.

His Excellency Nop Rath Nimol, Chairman of the Youth Working Group of Samdech Techo Hun Sen’s Cabinet and Representative of His Excellency Dr. Hing Bun Heang, also stated that the Cambodian People’s Party has liberated the country from the regime’s massacre. Genocide on January 7, 1979 and also considered the second birthday of all of us. In that, young people who are the successors of bamboo must strive to learn to develop the country to achieve continuous growth.

HE Nop Rath Nimol also added that 12th grade students must work hard to study online, with many doctors from the Ministry of Education, Youth and Sports teaching in various subjects to strengthen their knowledge. With that, try to improve the foreign language because many foreigners have come to invest in Cambodia. In fact, many tycoons in Cambodia, who have a lot of wealth, are the result of previous efforts, as difficult people as we are. By: Chan Thet

Previous Post
Latest: Bernard Njonga, former Addic president died in France
Next Post
Six new couples and an exciting challenge in “For each other”