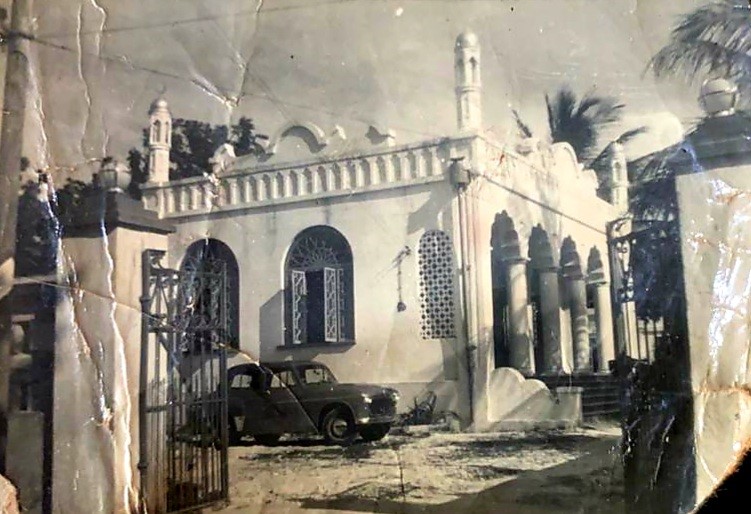 Disclaimer: The views and opinions expressed by this author are their own and do not represent the official position of the Barbados TODAY.

In 2017 I wrote about the 60-year presence of the second of the two mosques in our capital city Bridgetown. The City Mosque (now known as Madina Masjid) was opened in February 1957 on Sobers Lane. It is now a building of historic interest as designated by the Barbados National Trust.

Today, I write about the first of these two mosques, Jama Mosque. It was opened in 1951 on what is now Kensington New Road. It is the largest mosque on the island and its iconic structure a symbol of the enduring presence of Muslims
in Barbados.

The Jama Mosque symbolises the planting of institutional roots on this island by the migrant Muslim community who came from the villages of Gujarat, India, in the early 1900’s in search of better economic fortunes. They adopted Barbados as their home and perhaps Barbados adopted them as their own.

In a recently published e-magazine the history of this mosque is presented with researched information by Sabir Nakhuda and pictures that tell the story of this place of worship in our UNESCO World Heritage designated capital city.

Prior to the construction of the Jama Mosque in 1951 Muslims prayed at various homes around the city of Bridgetown.

The two main places where Muslims performed their weekly Friday prayers were both located at Cheapside. One at the 3-storey home of the Pandor family (obliquely opposite Literary Row) and the other at the home of the Sacha family (present day Caribsupply).

They had a deep yearning for a permanent place of worship on the island. In 1949 a 6700 square foot plot of land at Kensington New Road, at that time a cart road, was purchased and plans for the construction of the Mosque
began immediately.

The late Mohammad Yusuf Degia of Passage Road was the chief builder of the Mosque. He owned a machine making blocks and tiles of various designs and colours. His tiles and blocks were popular at the time and recently with the stripping down of the old Supreme Court Building in Bridgetown tiles bearing his brand name (Degia’s Unique Tiles) were dug up from there.

The Mosque was built with local coral stones and the decoration blocks were hand made with star-like designs by Mr. Degia. He was also responsible for building the mimbar (pulpit) and tiling the Mosque with tiles of varying colours and designs.

Funding to the build the Mosque came mainly from local contributions and some help from Muslims in Trinidad. The Mosque was officially opened on Friday January 26th, 1951 with the special Friday prayers and sermon. From then until today five daily prayers have been read in the Mosque.

The COVID-19 pandemic hampered such activity over the last year. Soon after the opening of the Mosque, religious classes for children commenced and many of the community’s young boys and girls were enrolled there for religious instruction and learning how to read the Holy Qur’an in the Arabic language.

It is noted that many of these early students were the children of marriages between East Indian Muslim migrants and Barbadian women. It was also highlighted that a popular Barbadian, Bridgetown character, “Gearbox”, who chauffeured for Mr. Pandor at that time, would pick up the children from around the neighborhood to transport them to classes. As the Muslim community grew with the influx of more migrants from Gujarat and as Muslims attached themselves to the Mosque the need to expand became necessary.

Properties around the Mosque were purchased and the Mosque expansion began in the mid 1980s. It was completed in the late 80s. The original Mosque, completed in 1951, accommodated around 95 worshippers, while the refurbished Mosque, done at a cost of almost $500,000 accommodates approximately 528.

The walls of the original Mosque built from local coral-stones, remained the same up to its original footprint and the original pulpit and semi-circle niche (mehrab) where the Imam stands remains intact.

The special green glass windows that adorn the Mosque today were brought in from Germany. The green colour has not faded due to its good quality. The specially designed lush carpet in the Mosque was also imported.

Since its inception in 1951 several Muslim families have taken up residence in Kensington New Road and surrounding areas to be able to attend prayers daily.

Simple homes on that narrow street that links Fontabelle to Baxter’s Road have over the years been expanded and enhanced such that some families there over generations have not moved away so as to continue to live in the vicinity of the Mosque.

This practice of live where you worship is a tradition among many Muslims and has been the norm in relation to some of the Mosques found on the island. Many Barbadians are aware of this symbolic Islamic heritage landmark which attracts locals and visitors.

Muslim tourists arriving on cruise liners which dock in the Bridgetown Harbour, in walking distance, or long-stay Muslim visitors, will be directed here to pray.

It is located in close proximity to the famous Kensington Oval where many local, regional and international cricket matches are played. It is not surprising to see famous cricketers of the Islamic faith praying at the Jama Mosque while they are in Barbados.

The Azan (call to prayer) has been sounded from loudspeakers since the 1980s for four out of the five daily prayers. As the Azan echoes across the neighbourhood, it attracts attention. Muslims respond to the call to attend prayers while others have been drawn to the Mosque on hearing its melodic sound. The call at times faintly audible during commentary of cricket being played at the Oval.

Over the years, besides being a place of worship and learning for Muslims, Jama Mosque has served as the venue for several events of national importance, visits, tours and programs related to the Muslim community of Barbados.

Prime Ministers and other members of Parliament have visited, especially in the lead up to General Elections. Ambassadors and other Diplomats have come calling to meet Muslims. In 2015 an important gathering of Barbados’ Christian and Muslim leaders took place at the Mosque. And in 2007 ahead of the Cricket World Cup, the Commissioner of Police and the Barbados Defence Force Chief of Staff met members of the Muslim community there.

The Jama Mosque joins the City Mosque in Bridgetown in showcasing to the world a capital city where persons of different faith traditions can live in peace and harmony over several decades and worship in comfort and safety.