Politics, economy and the secrets of power: a preview of the most important phrases from Mauricio Macri's book 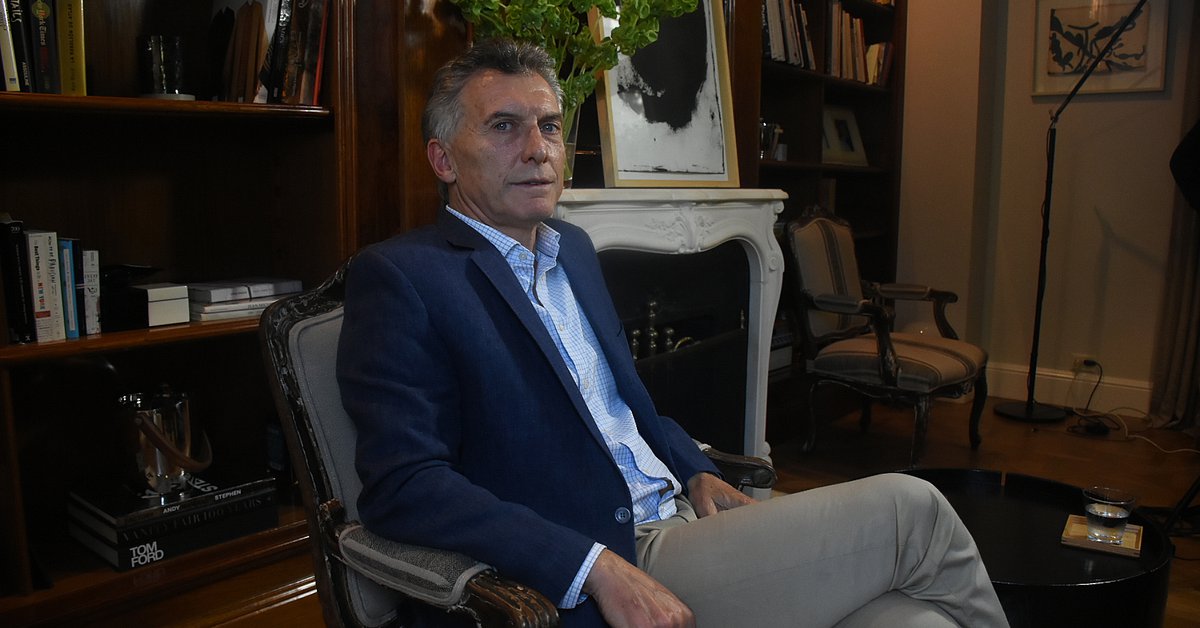 Primer Tiempo, the book by former president Mauricio Macri, arrived this Wednesday at the main bookstores in the country. On Sunday, Infobae had exclusively advanced a fragment of the work during which the leader of Cambiemos points out against Cristina Kirchner. “The former president is not well, I don’t know if she ever was,” he says.

The book has 13 chapters. It covers from the arrival of Cambiemos a la Casa Rosada, in December 2015, until the final days. The closing, entitled “This is just beginning”, anticipates movements of the former head of state who continues to be active and for now does not plan to withdraw from politics but quite the opposite.

In this note, the most important sentences of the book edited by Planeta are reviewed, which is marketed at $ 1. 690 and will be officially presented by the former president tomorrow Thursday 18 of March.

We were going up with Juliana, on the day of the assumption, and I told the elevator operator: “How hot, right?” The woman began to cry instantly. His gesture surprised me and I did not dare at that moment to ask him what was wrong with him. Later I learned that Cristina Kirchner never spoke to her and that they were forbidden to speak to her.

After the euphoria of the first days, in which we were all very happy to have defeated Kirchnerism and for having interrupted a process of growing political authoritarianism and economic populism, I returned to the reality of that, despite sitting in that office in Casa Rosada, he had much less power than it seemed.

The reality is that Cambiemos had a minority in both houses of Congress and governed only five provinces; We had a bankrupt economy, without energy and in default; The Court had received a ruling that had brought the accounts of the national State to its knees; and we were going to have, as happens to all non-Peronist governments, a cold reception (in the best of cases) from the unions.

One of the most common criticisms during my government was that we did not tell Argentines with clarity and detail the seriousness of the situation we received in December 2015. My answer is that they are right and wrong at the same time.

The first is that, in effect, they had left us an unexploded bomb whose fuse was really short. Whoever looks at the numbers in detail can see that with that deficit, that exchange rate delay, that Central Bank with negative net reserves and that artificially contained inflation, with traps of all kinds, the bomb was there. But my responsibility as pilot of the plane was to convince the Argentines and the markets that the bomb was not going to explode. Yes instead to calm the passengers and tell them that the situation was under control, scared them saying that we had a bomb about to explode, the situation could have become chaotic.

In addition, there was a risk that, by warning about the existence of the bomb, the great crisis would be generated we wanted to avoid.

There is an episode that shows the difference in human and political quality between María Eugenia Vidal and Axel Kicillof. María Eugenia, who really did not have a peso to pay anyone, did her best not to complain and get ahead. Kicillof, who received more than 30. 000 million pesos in the box, he complained bitterly about the situation received, as if he could not even pay for a box of matches.

After analyzing several profiles that had approached me to name the vacant judges In the Supreme Court, my favorites were Carlos Rosenkrantz and Domingo Sesín, president of the Superior Court of Justice of Córdoba. When we circulated the names of both candidates, Sesín was questioned by some important leaders of Cambiemos and an agreement was reached to name Horacio Rosatti. I regret. Rosatti ended up consistently failing against the reforms and modernization that we promoted.

Marcos Peña was criticized a lot in recent years for his supposed influence on economic policy, but the truth is that he participated little in the debates on the economy. Marcos’s greatest influence on government management was precisely in some of the areas where we received the most praise.

Marcos, María Eugenia and Horacio grew up with me and I am very proud to see the roles they have taken and their journey in these years. And the three of them have a huge future ahead of them, which will continue beyond what I do or my political career lasts

I made a big mistake when I said that Quintana and Lopetegui were “my eyes, my ears and my intelligence”. It was not a premeditated phrase or an indirect message against anyone: I simply wanted to express my satisfaction with the bond we had formed. But I regretted it because with that phrase I gave them a leading role and relevance that generated an inevitable counterattack, inside and outside the government. They started criticizing them right after, as an indirect way of criticizing Marcos or criticizing me.

I invited Sergio Massa to Davos. I wanted to show the world to Sergio and Sergio in front of the world, so that they would see that there were rational, democratic and long-term Peronists, as convinced as I was of what had to be done. Unfortunately, time showed that this characterization of Massa was more an illusion of mine than a reality.

One night in Davos we had lunch with him and Juliana. We had a frank conversation, like we had not had before and did not have again. I told him that because of his youth and his ability it was in him to be president at some point. “You only need one thing,” I added, “: to be reliable.” Sergio was already perceived at that time, by society and by the leadership, as someone who changed his mind and loyalties according to the convenience of the moment. At that moment I was excited to have convinced him. Sadly, it didn’t last long. A few months later, as soon as the political humor was complicated a bit, Sergio preferred to promote projects that gave him short-term stardom but broke the trust we had established.

The perception of him, in society and the leadership, has not changed. He continues to be seen as someone unreliable, in love with the short term, incapable of sustaining a country project or a political army according to his convictions.

Many attributed to Jaime Durán Barba a power he never had. He did not participate in the day-to-day decisions. Moreover, my encounters with him, either as a consultant or as a friend once I became President, became increasingly spaced precisely because the intensity of the daily rhythm prevented them.

As I write these lines I read with great sadness that Marcos Galperín, the founder of Mercado Libre, Argentina’s most valuable company, decided to settle in Uruguay. If one fact summarizes everything that is wrong in our economic life, it is difficult to find one that is worse. We need many Galperin, many companies like yours, that combine innovation, young work, value creation, talent. And suddenly, instead of taking care of them and multiplying them … we expel them. The kingdom upside down.

We have never funded trolls. And even without having evidence, many sectors, including some close to Bergoglio, have expressed that there were officials in our government carrying out anti-clerical or anti-Catholic strategies, which is completely wrong and unfair.

Today I believe that an important sector of the Church took sides against our policies and became actively part of the opposition. This situation caused great pain in the enormous number of Catholics who showed their support to us, even in the most difficult moments.

I don’t know what the reasons for this alignment were. I do not know why the Church raised the issue of hunger in the middle of the electoral campaign or what was the objective of its men in doing so. Nor do I know if this was encouraged from the Vatican in the numerous meetings that Pope Francis held with trade unionists and opponents. There are those who say yes.

When I arrived at Casa Rosada. the Argentine government had been financing first division football for five years. The parties had become a pro-government propaganda platform, the government was the sole advertiser, and the batches and the commentaries of the rapporteurs contained praise for the government and ruthless criticism of the opposition. They went so far as to compare me with those responsible for “the death flights” that occurred during the military dictatorship.

In the campaign he had had to juggle to talk about the issue, even though he knew that the fiscal situation of the Argentine State did not give at all to continue subsidizing professional football.

I named Fernando Marín was in charge of Fútbol para Todos, who had an extensive career in the media. The trust generated allowed large specialized companies to take an interest in Argentine soccer. And the solution was clear and transparent.

I am in favor of supporting sport as a state policy. But using it as a mechanism for private business and political propaganda seems immoral to me.

Neither the crack nor the corruption were the worst face of Kirchnerism. The worst thing about Kirchnerism is always its incompetence. His complete inability to solve the problems he set out to solve. Its vocation of destruction ranges from INDEC statistics to the country’s energy matrix, and from public accounts to legal security.

One of the biggest disasters carried out by Kirchnerism, which was very serious for the people and for the image of the country Before the markets, it was the nationalization in 2008 of the savings of the workers accumulated in the Administrators of Retirement and Pension Funds, the AFJP. Our country then lost the possibility of having internal financing thanks to this measure disguised as solidarity, the results of which are at the party.

Kirchnerism was and unfortunately continues to be the highest point of resignation to which they could lead us from politics.

Previous Post
Hermagor: Stichproben bei Ausreise
Next Post
Civil protection for the state of M'sila: No human or material losses caused by the earthquake