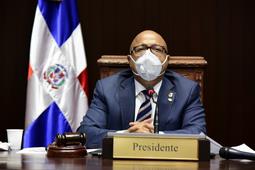 The Chamber of Deputies approved in a single reading the draft resolution 841, which requests the Executive Power to instruct the Ministry of Culture to establish public policies that promote the promotion and dissemination of merengue in the media of the Dominican Republic, as a cultural expression of the country.

Deputy Hamlet Amado Sánchez Melo, proponent of the piece, stressed that today’s generation does not know how to dance merengue, for which he thanked the legislators for the support offered to the initiative.

“Today we see young people, specifically generation Z, who do not know how to dance merengue, who do not even have the rhythm of a merengue and one of the things that identifies us as Dominicans is precisely that where wherever we arrive, when we stop to dance, they identify us as Dominicans ”, said Halet.

The deputy and artist Juliana Ycelmary Brito O ‘Neal (Juliana) expressed feeling happy, since, as a rhythm, the merengue is what identifies the Dominican anywhere in the world.

“The merengue is our DNA, it is our insignia and that is why I want to salute this initiative and congratulate Hamlet for taking part in our culture, which we must strengthen and support,” said the also merengue known as Juliana.

Deputy Francisco Solimán, stressed that today’s youth has relegated merengue to the background, for which he called and requested the President of the Republic, Luis Abinader and the Ministry of Culture, that a state radio station be set up that It is only merengue, so that when the tourist arrives in the country they can feel the Dominican culture through this musical rhythm.

“Hopefully the Dominican government can have a station that identifies us, placing the full day only our music, which will also serve for their rescue,” concluded Francisco Solimán.

Similarly, deputy Jorge Hugo Cavoli, member of the Permanent Commission on Culture, said that the application of this resolution will contribute to the promotion of tourism, because there are large markets with hundreds of millions of inhabitants, whose interest It is focused on visiting destinations with high cultural and historical components.

Deputy Juan Julio Campos, pondering the resolution, stated that the Permanent Commission on Culture of the Chamber of Deputies decided to give a favorable vote to this piece of legislation, authored by Hamlet Amado Sánchez Melo, because the Merengue and its dance have been part of the essence of Dominican culture for more than 150 years.

In such virtue, he stressed that a recognition of what that cultural value is will preserve for present and future generations. In addition, because the meringue is a plus and an attraction for the country’s tourism industry, since those who come to visit these countries seek cultural and historical tourism.

Promoting merengue is to enrich the cultural heritage of the Dominican people and, furthermore, that added value would contribute to the development of the country’s economy and tourism industry ”, he highlighted.