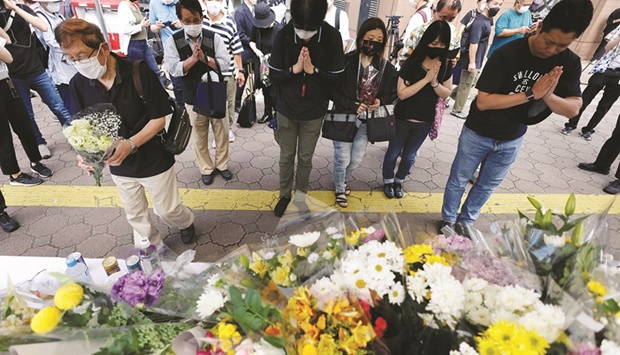 Japanese police yesterday admitted there were “problems” with security for former prime minister Shinzo Abe, as his body arrived at his family home a day after he was assassinated on the campaign trail.
The country was in mourning for Japan’s longest-serving premier and well-wishers gathered to pay their respects, with senior politicians dressed in black arriving at Abe’s Tokyo residence to offer condolences.
But candidates also continued campaigning for the upper house election today, with Prime Minister Fumio Kishida insisting: “We must never allow violence to suppress speech during elections, which are the foundation of democracy.”
The murder of Japan’s best-known politician has rattled the country and sent shockwaves around the world, particularly given the nation’s low levels of violent crime and strict gun laws.
Police are still piecing together details of the man who opened fire at close range on Friday, but the 41-year-old named as Tetsuya Yamaguchi has confessed to killing the former premier, motivated by a belief Abe was linked to an unspecified organisation.
The tearful head of police in the Nara region where Abe was killed admitted yesterday there were “undeniable” flaws in security for the former leader.
“I believe it is undeniable that there were problems with the guarding and safety measures for former prime minister Abe,” said Tomoaki Onizuka, head of the Nara prefectural police, pledging a “thorough investigation.”
“In all the years since I became a police officer in 1995…there is no greater remorse, no bigger regret than this,” he said.
Early yesterday afternoon, Abe’s body arrived at his home, where mourners like Tetsuya Hamada gathered to offer prayers and flowers.
“I am stunned that things like this still take place in Japan,” he told AFP.
“It makes me sad. How it is possible that this happened in broad daylight?”
Japan’s upper house election will go ahead as planned today, and Kishida calling on supporters to “help us until the very end.”
But Abe’s death cast a long shadow, and at the scene of his murder, 52-year-old Kayoko Ueda was wiping away tears and described herself as “distraught”.
“I couldn’t believe something like this could actually happen in Japan,” she said. Yamagami’s motives remain unclear, with police declining so far to identify the organisation he believed Abe had links to.
They are investigating claims Yamagami served in Japan’s navy, and said he appeared to have used a handmade gun.
National broadcaster NHK said he described months of planning for the attack, including an original plot involving explosives that was later shelved in favour of building guns.
Citing police sources, the station said Yamagami also claimed to have scouted out Abe at other speeches.
Security at local campaign events in Japan can be relatively relaxed, but given Abe’s profile, questions have been raised about whether measures to protect him were too lax.
Dramatic footage of the attack showed Yamaguchi, dressed in a grey shirt and brown trousers, was able to approach Abe from behind without being intercepted, and draw a weapon from a bag. He appeared to fire two shots, each producing a cloud of smoke.
Doctors who treated Abe said he sustained multiple wounds to his neck and the internal damage from the shooting reached as deep as his heart.
He died of blood loss, despite receiving massive transfusions.
International reaction to Abe’s death was swift and stark, with US President Joe Biden saying he was “stunned, outraged and deeply saddened”, and ordering flags on US government buildings to fly at half-mast.
Even regional powers with whom Abe had clashed expressed condolences.
Chinese President Xi Jinping said he was “deeply saddened” by the killing, which South Korea’s president called an “unacceptable act”.