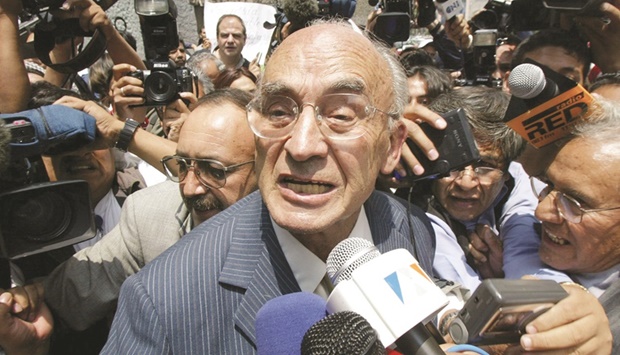 Former Mexican president Luis Echeverria Alvarez, known for brutal repression of political opponents, has died at the age of 100, the government said yesterday.
Echeverria, who belonged to the once dominant Institutional Revolutionary Party, or PRI, died on Friday in the city of Cuernavaca, President Andres Manuel Lopez Obrador wrote in a message of condolence.
A lawyer by trade, Echeverria was accused of ordering massacres of students in 1968 when he was interior minister and again in 1971 when he was president, both times in Mexico City.
He stood trial over the death of some 200 student protesters in the 1968 violence in the Tlatelolco district of the Mexican capital right before the Olympic Games.
It was the first time a former president was indicted in Mexico.
A house arrest warrant was issued for Echeverria in 2006 but the charges were eventually dropped on grounds there was a lack of evidence that he had ordered the killings by an elite police unit.
He was also accused of being behind forced disappearances of dissidents during a so-called “dirty war” from 1960-1980.
Bald and bespectacled, Echeverria denied wrongdoing and said his conscience was clear.
He refused to testify about crimes that have not been fully cleared up to this day.
His death comes two weeks after the government gave relatives of people who disappeared during the 1970s access to military archives to try to learn what happened to their loved ones.
On the diplomatic front, after president Salvador Allende was ousted in a military coup in 1974 in Chile, Echeverria severed relations with that country and allowed Mexico to take in Chilean refugees.
After he left the presidency, Echeverria, a father of eight, served as Mexico’s ambassador to Unesco in Paris, among other diplomatic postings.
Born on January 17, 1922 to a middle class family in Mexico City, Echeverria was known for embracing a leftist foreign policy while cozying up to Washington.
Richard Nixon was fond of Echeverria.
“He’s strong, he wants to play the right games,” Nixon said of Echeverria in a recorded conversation with the director of the Central Intelligence Agency.