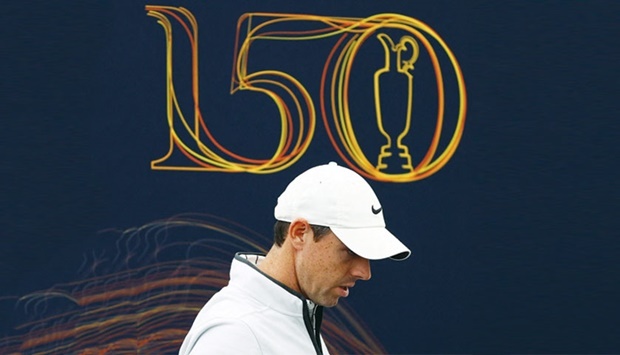 St Andrews hosts the 150th British Open from today with Rory McIlroy starting as the favourite for the Claret Jug while a determined Tiger Woods hopes to make an impact at a venue where he has triumphed twice before.
Record crowds for the week of 290,000 are expected on Scotland’s east coast for this landmark edition of the world’s oldest golf tournament, which comes to the Old Course for the 30th time.
With fine weather expected to continue for much of the week, it is shaping up to be a fitting way to mark a historic British Open, even if the sport continues to be rocked by the fallout caused by the breakaway LIV Series.
Players who left to join the Saudi-backed tour were allowed to take part by Open organisers, just as they were at last month’s US Open despite both the PGA Tour and DP World Tour moving to ban the rebels.
That means four-time major winner Brooks Koepka, Sergio Garcia, Bryson DeChambeau, Dustin Johnson and former Open champion Phil Mickelson will all tee off on Thursday.
McIlroy, though, is aiming to end an eight-year wait to add to his four major titles and the Northern Irishman is the favourite
“Not a lot of people are going to get that opportunity to achieve that, but that’s what winning an Open at St Andrews is,” McIlroy said yesterday.
The world number two won the 2014 Open at Hoylake but missed the chance to defend his title in St Andrews a year later after injuring an ankle playing football.
“I can’t go in here thinking that this might be my time. I just have to go out and play a really good tournament,” he added.
McIlroy will tee off in Thursday’s first round alongside Collin Morikawa, winner of last year’s Open at Royal St George’s, and Xander Schauffele, who triumphed in last weekend’s Scottish Open.
There is no shortage of contenders, not least among the large contingent of American stars including world number one Scottie Scheffler and 2017 Open winner Jordan Spieth.
“If you’re not getting amped up to play in this Open, I’m not sure this is the right sport for you,” said Spieth on Tuesday, when stiff breezes blowing across the course served as a reminder of the challenges St Andrews can pose.
There has been some talk of the Old Course becoming too easy, 149 years on from the first Open here, but it still captivates players.
They will continue to be challenged in particular by the par-4 17th – the Road Hole is one of the toughest in golf, where players must send their tee shots over the Old Course Hotel.
Jack Nicklaus, twice an Open champion here and who was this week made an honorary citizen of the town, called St Andrews “a magical place”.