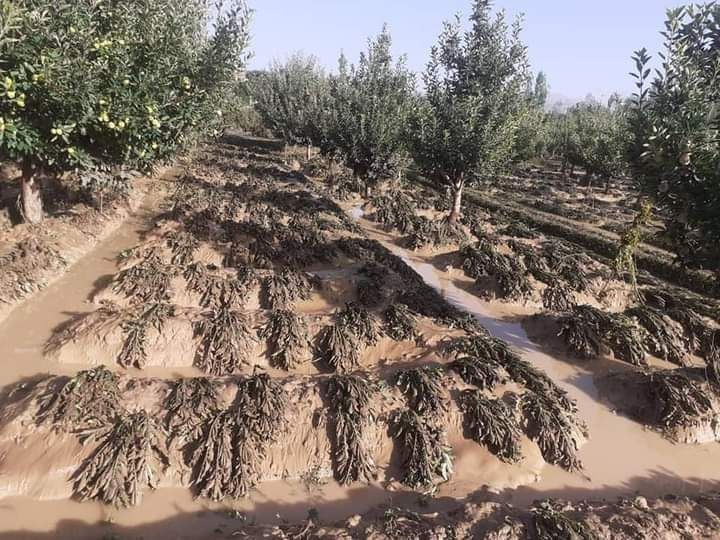 The unusually heavy rains have caused floods in various provinces, killing dozens of people and causing huge financial losses so far. According to environmental experts, the Taliban administration’s recklessness has increased casualties and financial losses in the time of disasters.

In the latest case, the football federation of Ghazni province announced that the floods have destroyed the $850,000 football stadium in the city. According to experts, people do not take evaluations seriously and the development of residential areas and cities has increased along the river beds and floodgates, which has caused devastating casualties and huge damages, following the occurrence of floods in Afghanistan. The inconsistency of government institutions with the Taliban’s recklessness in preventing natural disasters are the other issues that increase human casualties and financial losses caused by floods.

Meanwhile, Najib Agha Fahim, the Minister of Combating Natural Disasters in the previous government, believes that Afghanistan is naturally exposed to all kinds of threats. Referring to the recent earthquake in Paktika and Khost provinces, Mr. Fahim added: “Our country is exposed to natural disasters.” According to him, the increase of rain in this season is not a new phenomenon. Mr. Fahim states that Afghanistan is normally hit by a wave of rain in the early summer season, which enters the country from the subcontinent.

The former minister of combating natural disasters attributes the factors of the increase of floods to climate change and emphasizes that climate change has caused the intensity of rainfall and at the same time the duration of these rainfalls has become shorter. He considers these factors to be the cause of more casualties and damages, noting that Afghanistan has lost its forest cover and its vegetation has been limited.

The former Minister of Combating Natural Disasters mentions the Kabul Sea as an example. According to him, there is currently no privacy left for this sea from the beginning to the end, especially in the Karte Naw and Makrorian areas. According to him, villages and residential areas in a number of provinces are built in floodplains, which increase the casualties and damages being caused by floods. Mr. Fahim emphasizes that people do not take flood threats seriously.

According to Mr. Fahim, Afghanistan has experienced drought for several years in a row and that is why people do not take flood threats seriously.

The former minister of fighting against natural disasters does not only blame the people, he also refers to the role and responsibilities of the current and previous governments who have not played their role effectively and responsibly.

“Governments have several special duties regarding natural disasters,” he adds. “Predicting accidents, then preventing the occurrence of an accident, and then preparing and dealing with it, and lastly rebuilding and repairing the damages caused by natural disasters are the duties of government in the face of natural disasters. These duties have not been done responsibly at any stage in the current situation of Afghanistan.”

According to him, the departments that are currently fighting against natural disasters are not familiar with their duties and their warehouses and reserves are also empty. Mr. Fahim considers the selections in the managerial levels of these institutions to be a matter of taste and says: “People who were familiar with the work have been left out all at once.”

The former government official emphasizes that it is possible to predict the occurrence of floods, provided that there is knowledge and expertise in this field. He mentions the handbook about the risk caused by natural disasters in the Ministry of Combating Natural Disasters, which is about 500 pages with specific details on the intensity of rainfall and the risk level. According to Mr. Fahim, the dangers caused by floods in all regions of the country, up to the level of villages, are predicted in which the Taliban can use it.

According to the former minister of combating natural disasters, people, as the main victims of natural disasters, should pay attention to weather warnings and assume that there is no government, and they should refer to historical experiences and take measures to at least save their lives. He says that currently in the Ministry of Natural Disasters, there is no knowledge and expertise in disaster management. According to him, the Taliban group has dismissed the experts and replaced them by mawlawis whose highest level of education is reading and writing.. Mr. Fahim adds: “All the deputies have been dismissed, the chiefs have been dismissed, the provincial chiefs have been dismissed, and those who are present at the lower level, their words are not heard seriously.”

The former Minister of Combating Natural Disasters explains: “If there is no specialized knowledge and no management capacity, money alone will not solve the problem.”

Meanwhile, with the recent floods, people in a number of provinces have suffered casualties and widespread financial losses. Farmers complain about the flooding in their areas and say that the recent floods have destroyed their farms which was the result of the whole year’s labor work and investment.