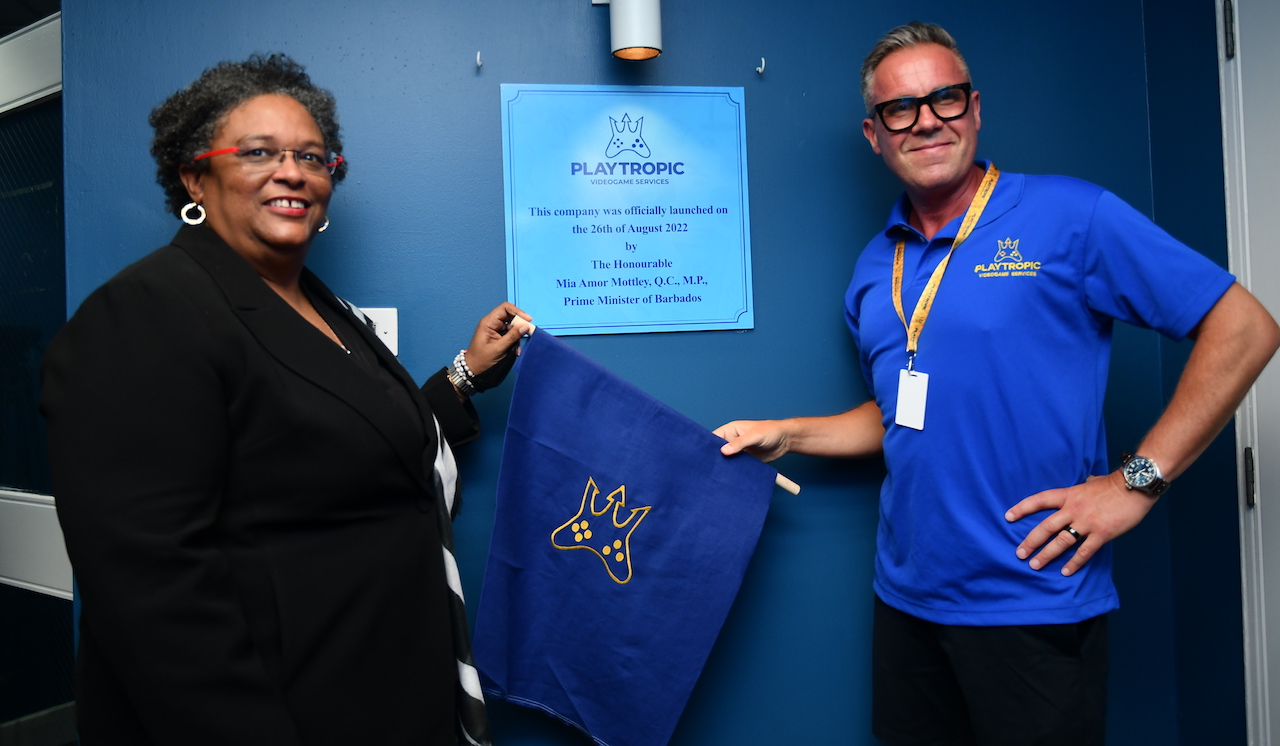 Barbados has welcomed its first video gaming services firm, which is expected to create hundreds of jobs and contribute significantly to the build out of a gaming industry here.

And an upbeat Prime Minister Mia Mottley said she was elated that the island’s creative industry was getting a major boost.

President and Founder Joel Benton hopes to increase employment to between 200 and 300 people “fairly soon”.

“They don’t even need to have a degree, they have got to be passionate about games and we provide full training,” he said.

“I hope we can build the skills necessary to actually create video games here that are meaningful to Barbadians and everybody else around the Caribbean,” he said.

Mottley also attended the opening where she said the investment in the industry was a sign of “the confidence many of us had that one of the key productive sectors in Barbados will be the creative economy” and not just tourism, manufacturing, agriculture, renewable energy, international business and construction.

“More than anything else it is the creative genius and resilience of Caribbean people that have allowed us to withstand these centuries and to create something special and marvelous out of what we have here,” she said.

Mottley, a former Minister of Education, said she was looking forward to the building out of the gaming industry to help boost the island’s economic prospects.

“You have just heard that this industry is 40 times the Barbados economy . . . It meets us where we want to be met,” she said.

Benton, who has a property on the island, said he chose Barbados for the operation because he wanted to contribute to the development of one of the most beautiful countries in the world.

“We come here as often as we can for the beaches, the people and the rum punch, but we didn’t want to be another person from England who just came and left again. I wanted to bring some of my skills to ideally build a business here that would benefit Barbados,” he said.

“Video gaming is booming at the moment because of investment around the world, and Barbados educates its people to a very high standard and there is a very big gaming community in Barbados but there are no places for those people to work without leaving and going to Europe or North America,” he said.

Benton said he is starting with acquiring talent in the lower-skilled area of testing but intends to work closely with local learning institutions and the Ministry of Education to get more people trained in more high-skilled areas such as coding, art and design, engineering and production to further develop video game production on the island.

The businessman has been involved in the video game industry in Europe for the past two decades and has built relationships with a number of video game companies, which he would be tapping into to provide them with the necessary services.

“We have investors who are very supportive. We have our first two clients and things are going extremely well and we hope to grow very rapidly. The growth will depend on finding the people here in Barbados who want to be trained to test games,” said Benton.

Noting that she appreciated the risk being taken, PM Mottley said she was aware of the need for a lot of investment.

She said for Barbados to be the centre of excellence in the gaming space in the Carbbean and the Americas “we have to put in the investment”.

The Prime Minister said her administration will be working closely with Play Tropic on developing the competency-based training that is needed in the industry.

“The ultimate dream is for us to be creating our own games,” said Mottley, who insisted that Barbados had a lot of stories to be told and it could be done through video games.