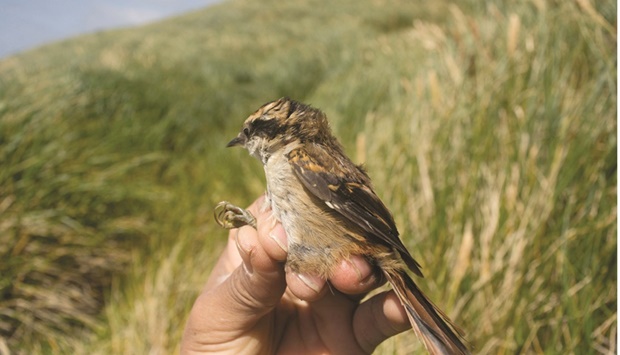 In a sparse, windswept pasture at the frigid tip of South America lives a tiny bird whose quiet life is shedding light on the importance of studying the world’s most remote places.
In the Diego Ramirez Islands, 100km (62 miles) from southern Chile’s Cape Horn, scientists have identified the Subantarctic rayadito, a 0.035-pound (16g) brown bird with black and yellow bands, and a large beak that is confounding biologists.
That’s because the Subantarctic rayadito, which resembles a rayadito species that inhabits the forests of southern Patagonia and nests in trunk cavities, was found “living in a place with no trees”.
“There are no bushes and no woodland species, literally in the middle of the ocean a forest bird has managed to survive,” said Ricardo Rozzi, an academic from Chile’s University of Magallanes and the University of North Texas and director of the Cape Horn International Centre for Global Change Studies and Biocultural Conservation (CHIC).
The finding, reported on Friday in the science journal Nature, was made after a six-year investigation in which the tiny bird became an “obsession” to researchers, said Rozzi.
One of the researchers, Rodrigo Vasquez, a biologist at the University of Chile, said that genetic studies confirmed that the newly discovered species “differs in a mutation from the rest of the species of the classic rayadito species”, in addition to other differences in form and behaviour.
The researchers said they had captured and measured 13 individuals in the island.
“The Birds from the Diego Ramirez population were significantly heavier and larger (with a longer and wider bill and longer tarsi), but they had a significantly shorter tail,” they said in Nature.
To Rozzi, the species could become “a symbol … that will contribute to the knowledge” about the little-known Diego Ramirez Islands.