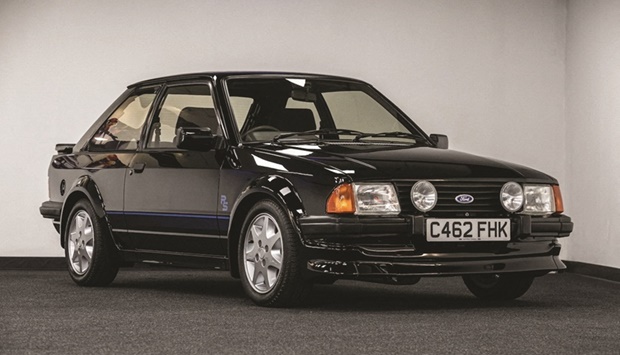 A sporty Ford Escort that was once Princess Diana’s runabout sold at auction for £737,000 yesterday, a few days before the 25th anniversary of her death.
The modest car, with just 24,961 miles (40,000km) on the clock, went under the hammer at Silverstone Auctions in Warwickshire in central England.
Bidders from Dubai, the United States and Britain held a heated bidding war for the one-of-a-kind model, resulting in a sale to a buyer from Alderley Edge, an upmarket village in northern England that is home to many Premier League footballers.
The sale price equivalent to around $866,000 comes as interest in Diana’s life remains huge, a quarter-century after her death, fuelled by the success of The Crown Netflix series.
The auctioneers said the sale attracted “a supreme amount of global press and publicity interest”.
The car was sold without a reserve price, with bids starting at £100,000.
It sold for £650,000 plus buyer’s premium.
The black Ford Escort RS Turbo S1 with a blue stripe was driven by Diana between 1985 and 1988, as she preferred to have her own car instead of the royal family’s stately Rolls-Royces and Daimlers, according to the lot description.
The auctioneers said the unique Ford Escort remains the “most daring choice” of car by any member of the Royal Family.
The Escort was no luxury vehicle but one of UK’s best-selling cars of the era, totalling more than 4.1mn sales, according to Auto Express website.
Similar cars with a less illustrious provenance can be found in classified ads in the UK for around £10,000.
This car, however, was made by Ford according to Diana’s specifications and it is believed to be the only black-painted version of this model.
Diana was frequently photographed at the wheel visiting shops and restaurants in London.
Prince William was also photographed sitting in the back.
The princess drove the car with a royal detective in the passenger seat and it was adapted with features such as a second rear view mirror and a radio in the glove box.