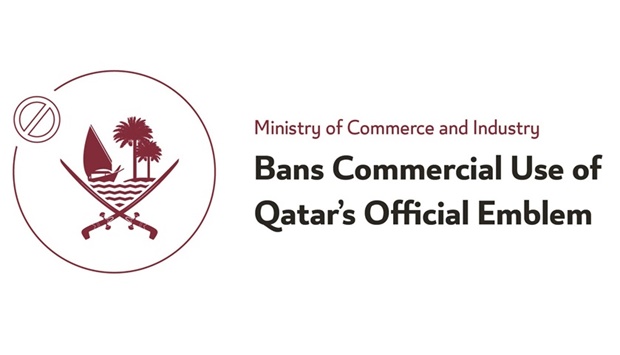 The Ministry of Commerce and Industry (MoCI) has banned the commercial use of Qatar’s official emblem.
In a statement yesterday, the ministry said it “underscored banning the use, sale or circulation of Qatar’s official emblem by commercial stores, as well as its commercial use on electronic platforms, in accordance with Law No. 9 of 2002 with respect to Trademarks, Trade Indications, Trade Names, Geographical Indications, and Industrial Designs and Templates”.
The ministry said it is working in co-ordination with the authorities concerned to ensure that traders, store managers and others comply with what is stated in this announcement.
Further, the MoCI said it will intensify inspection campaigns and take the necessary legal measures against anyone who violates laws and the enacting ministerial decisions.
HE the Prime Minister and Minister of Interior Sheikh Khalid bin Khalifa bin Abdulaziz al-Thani had inaugurated the updated version of the emblem last week. It was aimed at creating a unified visual identity of the emblem for all state authorities.
The updated version of the emblem preserves the historic components and their indications and bears the values, history and the heritage of Qatar to collectively constitute a visual symbol indicating the characteristics and features of the State, which summarises in its essence (the sword, the sea, the boat and the palm).